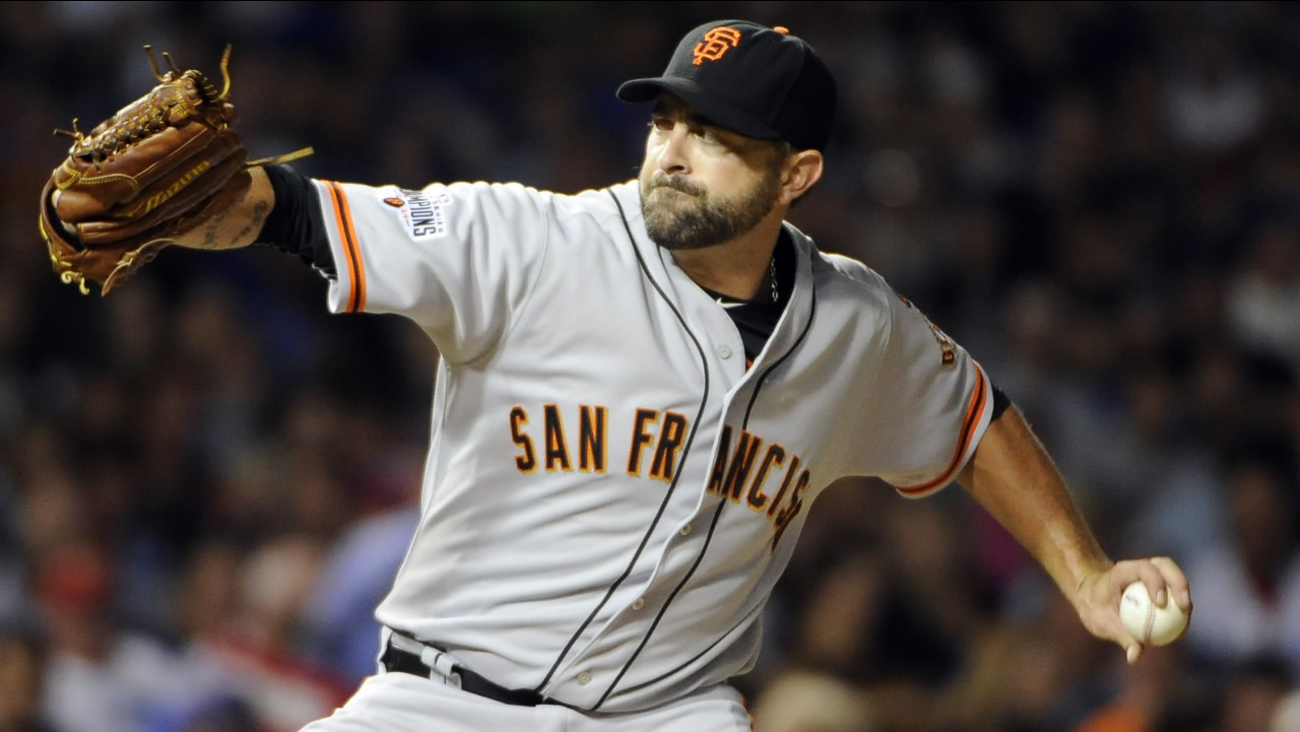 SAN FRANCISCO -- Torn between being a present father to his three young sons and a professional pitcher, Jeremy Affeldt nearly walked away from baseball for good at the All-Star break before manager Bruce Bochy and catcher Buster Posey talked him into sticking it out a couple more months.

“It’s time for me to walk away. This game is meant for young men. I feel right now I need to leave. I’m going to take my ball and go home"

Now with the season wrapping up, the 14-year veteran is making the move he thought about months ago to turn his attention to family and further involvement with several causes he has worked with for years.

The left-hander announced Thursday this would be his last weekend of baseball as the reigning World Series champions end the year without a playoff berth. Affeldt, 36, was the 2014 World Series Game 7 winner at Kansas City and is completing an $18 million, three-year contract and his seventh season with the Giants.

Affeldt, Santiago Casilla, Javier Lopez and Sergio Romo have been part of four core relievers on each title team three of the past five years.

"I'm very thankful I was able to come through in some big situations to help us win championships," Affeldt said. "To say I was a part of that for me is a tremendous honor. To say I won three world championships on the same team is an amazing feat."

“I want to thank everyone of you for the time here. 7 years with the organization” #ThanksAffeldt

While Affeldt had kept open the idea of pitching one more year when this season began, he said he would listen to his sons to help him make the decision - if they wanted him home, that might win out. He and wife Larisa discussed the possibility before the season.

Affeldt also pitched for Kansas City, Colorado and Cincinnati. He has missed 34 games this season for two stints on the disabled list, with a strained pitching shoulder and a left knee injury. He twisted the knee during an Aug. 24 off day while playing with his sons outside Spokane, Washington, where he grew up and still lives.

Jeremy calling it a career after this season. Going to miss him. https://t.co/QiO8WViyng

That was just one of several fluke injuries the lefty sustained in off-the-field mishaps in recent years.

"I've been accident-prone all my life," he said.

In April 2011, he sprained his right knee and went on the DL after reaching out to catch his then-4-year-old, 60-pound son when the boy jumped off the couch to greet his father. On Sept. 8 that year, he sliced his non-throwing hand while separating frozen hamburgers during a barbecue with his family on an off-day. The paring knife he was using pushed through a hamburger patty and deep into his hand. Affeldt came within a millimeter of an artery and underwent surgery about eight hours later to repair nerve damage in his pinkie.

“I’ve been thinking about this all year. It’s been a hard year on me, I want to be more invested with my family” #ThanksAffeldt

"He's going to have to hire a full-time trainer," Bochy joked. "He's made enough money to have a guy staying at the house."

After going 1-2 with a 2.70 ERA in 67 appearances over 63 1-3 innings during the 2012 season, Affeldt received his last contract. He has been part of a stable bullpen that has been such a key for Bochy's club in winning three of the past five World Series titles.

"You can make an argument we're not putting on any of those rings without this guy," reliever Javier Lopez said.

The ex-military brat who is open about his deep faith released a book in 2013, "To Stir a Movement: Life, Justice, and Major League Baseball." He acknowledged he overcame homophobia when he initially joined the Giants in 2009 and often would seclude himself in a hotel room.

A great stat for @JeremyAffeldt. 22 consecutive scoreless appearances in postseason. Congrats on a great career. https://t.co/OnayQEBqR6

And fans will get a chance to chat with @JeremyAffeldt tomorrow Twitter Q&A, Friday 1:45pm #AskAffeldt pic.twitter.com/LmvujEhAoH

In the book, he also acknowledged how he returned $500,000 to the Giants after a typo in the contract gave him an accidental bonus before the 2010 season.

He began his book and life story in Thailand, where Affeldt - about 10 at the time - was grabbed by a man and pulled toward a building as he fought to get away, only to have his dad catch up and help him escape.

Affeldt has become a strong supporter of efforts to stop sex trafficking, and believes that's where he could have been headed that day. His father was stationed in Guam at the time, so they traveled regularly in Asia.

Going into Thursday's series finale against the Dodgers, Affeldt had a 43-46 career record and 3.97 ERA in 772 appearances spanning 924 2-3 innings with 28 saves. He joins right-hander Tim Hudson heading into retirement, and both will be recognized during weekend games against Colorado.