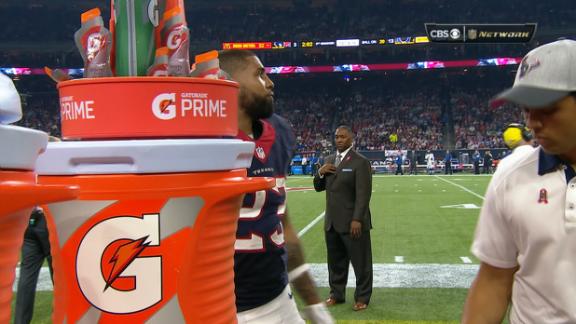 HOUSTON --Texansrunning back Arian Foster was taken to the locker room in the second quarter of Thursday night's game against Indianapolis with an unspecified injury.

Foster was injured after taking a hard hit with about four minutes left in the second quarter. He remained on the field as trainers looked at him for a couple of minutes before walking off the field. He came back in two plays later and carried the ball for no gain before going to the locker room.

Foster was visibly frustrated on the sideline, grabbing a tray of beverages and slamming it onto the ground before going inside.

The team did not provide any details on his injury, but CBS Sports reported Foster was undergoing the concussion protocol. He returned to action for the Texans in the third quarter, and finished with 44 yards rushing and 77 yards receiving.

This was Foster's second game this season after he missed Houston's first three games after groin surgery.