Yadier Molina scratched from Cardinals' lineup for Game 4 of NLDS 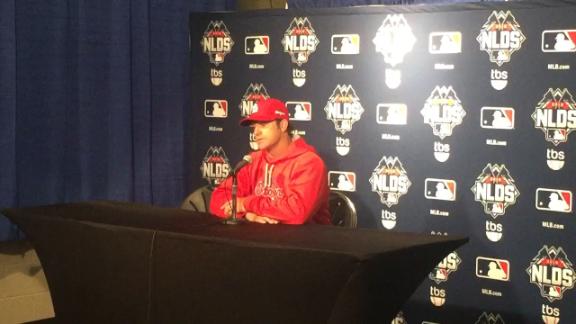 Cardinals catcher Yadier Molina has been scratched from the lineup for Game 4 of the National League Division Series against the Cubs after experiencing weakness in his injured left thumb.

Cardinals manager Mike Matheny announced the lineup change before Tuesday's game, saying that he had penciled Molina into the original lineup because he expected that the All-Star would respond well to overnight treatment to his thumb.

But Molina still had "considerable weakness in his thumb" on Tuesday morning, according to Matheny, who announced that Tony Cruz would start at catcher.

Molina winced on a swing-and-miss in the fourth inning of Monday's Game 3 loss and was checked on by Matheny and a trainer. He was replaced by a pinch hitter in the sixth.

Matheny said that Molina would still be available to enter the must-win game as a defensive replacement for the Cardinals, emphasizing that the injury has not hindered his ability to catch.

"Catching isn't the issue," Matheny said. "With the splint he has, catching-wise, he's able to come in there. If something happened in this game and we needed a catcher to come in, it would be Yadi, and we'd be all right with that.

"As everybody saw, it was a swing that got him, and when that happened, it just really took away the opportunity for him to swing as we moved forward."

Matheny also indicated that Molina could return to the lineup if the Cardinals, who face a 2-1 series deficit, force a decisive Game 5 with a victory Tuesday at Wrigley Field.

"This is an injury that really relies on rest, and after the season, everything will be kind of addressed to the severity," Matheny said. "At this point, the doctors are comfortable if he can tolerate it. But it's just really difficult to swing the bat, and if we get an opportunity to play beyond today, a little bit of rest, a couple days of rest may do wonders and we see him back."

Molina, 33, batted .270 with four home runs and 61 RBIs this season and has one hit in eight at-bats during the NLDS.

ESPN.com's Eddie Matz and The Associated Press contributed to this report.