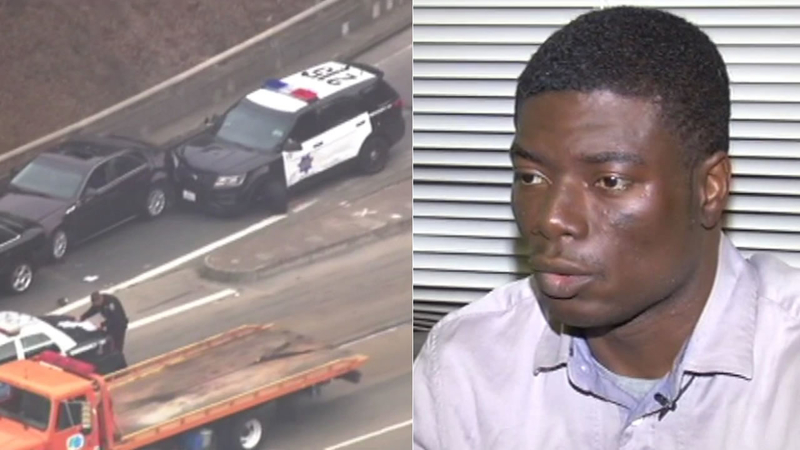 SAN FRANCISCO (KGO) -- ABC7 News spoke exclusively with a man injured in a bizarre chase and crash that started with a stolen San Francisco police car on Saturday. It was a pursuit that ended right behind Mohammed Tijani.

"It hit me and my car accelerated into the car ahead of me," he recalled.

SKY 7 HD video shows where the police SUV slammed into Tijani's maroon Cadillac. But he was surprised to see someone who was not an officer jump out of that police cruiser.

He said a policeman also jumped over the ledge to the lower level of the Bay Bridge. That's where officers were able to make an arrest.

This chase started miles away in the Marina District when police were called there to deal with a man waving a knife.

"And was able to make entry into the officer's marked patrol vehicle and actually steal the vehicle from the officers, which still had the keys in the ignition," SFPD Dep. Chief Hector Sainez said.

That's when he led police on a chase through the city.

Speck saw the commotion in the Mission District and later was caught in traffic coming back into the city on the Bay Bridge.