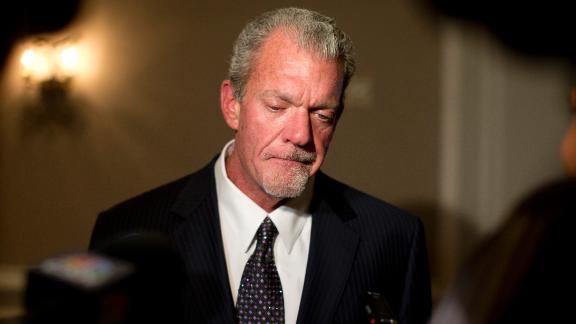 INDIANAPOLIS -- Indianapolis Colts general manager Ryan Grigson passed along his well-wishes for Jim Irsay and then said they'll be fine dealing with the draft and free agency while the owner is in a rehabilitation facility.

"Obviously nothing but great things to say about Jim, he's been magnificent and has done so much for myself, %5Bcoach%5D Chuck %5BPagano%5D, the entire building, everyone in the building loves the man," Grison said in his first comments since Irsay was arrested March 16. "We all would run through a brick wall for him. We all wish him a full, complete recovery and we're all pulling for him, and I'll leave it at that."

Irsay faces four felony counts of possession of a controlled substance after being arrested on suspicion of intoxicated driving in the northern Indianapolis suburb of Carmel late Sunday.

If convicted on the felony charges, Irsay could face six months to three years in prison on each count. Schedule IV drugs such as those with which Irsay was allegedly caught include Xanax, Valium and Ambien, which are considered to have relatively low risks for abuse or dependency, according to the Drug Enforcement Agency.

Irsay entered a health-care facility for an unknown amount of time on March 18.

This isn't the first time he's had issues with pain pills. Irsay acknowledged in 2002 that he had become dependent on painkillers after several orthopedic operations, but he said he had overcome the problem after undergoing treatment.

Carlie Irsay-Gordon, Irsay's daughter, has the final say on the team's decisions.

This is the first time that Irsay will not be around to be a sounding board for Grigson, who just completed his second season as general manager of the Colts. Irsay has vast football knowledge, as he was the team's general manager in 1984.

"When there's big dollars, something major going on, Jim is always right there, but he leaves the football decisions up to me and he trusts me," Grigson said. "He hired me to make football decisions, so I don't see any of that changing. ... If there's something I need to lean on him about in terms of using his football knowledge for my benefit, for the Colts' benefit, I reach out to him, but like I said, he doesn't micromanage me; he lets us all do our job. I don't really see it being an issue."

The Colts are likely done making any more major free-agency moves, as Grigson said they signed everybody they went after.

"You never say you're done, but if something pops up I'm always looking at it," Grigson said. "If one of my guys brings me a name that is of interest, I'll look at him. We had a plan in place and we feel really good about it and we feel real good where we're at right now."