ESPN
By Jerry Crasnick
KANSAS CITY, Mo. -- Home run trots and bat flips are nice, but two seasons in the postseason cauldron have taught the Kansas City Royals that well-placed grounders up the middle and line drives in the gap can have an equally demoralizing impact on an opponent.

The Royals have a mantra for this functional, decidedly un-sexy approach: "Keep the line moving.'' Dale Sveum has hammered those four words into their collective skulls since taking over as the team's hitting coach in May of 2014, and the mindset is particularly resonant in October, when going down quietly is never an option.

"You can see how the guys here respond to pressure situations -- how they look forward to that,'' said second baseman Ben Zobrist, who arrived in Kansas City from Oakland via trade in late July. "The postseason. The bright lights. Guys love that here. They just relish that opportunity and thrive in that environment. I think that's a big reason we've been successful and we're able to come back in tough situations.''

The Royals' ability to keep their composure, stay disciplined and share the burden of responsibility is paying dividends that endure beyond postgame backslaps and handshakes. Their team-wide sense of resolve has them two wins away from a second consecutive trip to the World Series.

The Royals looked perplexed to the point of helpless against Toronto ace David Price for most of Saturday afternoon -- until chaos intruded on the premises. First, a messed-up pop-fly single by Zobrist put Kauffman Stadium on full-fledged rally alert. Zobrist's teammates followed with one clutch hit after another, and the Royals rallied to beat the Blue Jays 6-3 and take a 2-0 lead in the teams' best-of-seven American League Championship Series.

Most teams are happy to bat around once or twice in a postseason; the Royals have mounted two epic comebacks in a span of six days. Last Monday, they trailed the Houston Astros 6-2 in the eighth inning and were on the verge of elimination when they sent 11 men to the plate against relievers Will Harris, Tony Sipp and Luke Gregerson and scored five times to take the lead. The Royals went on to win Game 4 of the Division Series 9-6 and eliminate the Astros two days later.

Of course, true-blue Royals fans will always treasure the memories from 2014, when their team rallied from a late 7-3 deficit against Jon Lester and the Oakland Athletics to win the AL wild-card game and advance all the way to the World Series. Kansas City manager Ned Yost has frequently cited that game as the moment when his young players convinced themselves that anything was possible. "It's about everybody buying in, trusting the guy next to you and believing we can do this,'' first baseman Eric Hosmersaid. "When you're surrounded by guys who've all bought in and believe the same thing and you have crazy comebacks, your attitude is, 'We've done it before, so why not do it again?'''

For six innings Saturday, the Royals looked like little more than props in Price's quest for postseason redemption and a $200 million, free-agent contract. Price was so sharp with his fastball, cutter and changeup, he sailed through the first four innings with a ridiculous 31 strikes and eight balls. As hellacious as his stuff was, the late-afternoon shadows at Kauffman Stadium added to his aura.

"Taking nothing away from him, but it felt like the ball was disappearing in the early innings,'' Royals outfielder Lorenzo Cainsaid.

Kansas City got its big break when a seemingly harmless pop fly dropped between right fielder Jose Bautista and second baseman Ryan Goins, who called for the ball twice only to back away at the final instant. Zobrist, the author of the pop fly, was so exasperated by his swing that he slammed his bat to the ground in disgust. A few seconds later, he was standing on first base quietly mouthing a thank you as the cheers at Kauffman Stadium gradually ascended to a roar.

"Just a little crack is all we need, and it seems we're just able to get thing rolling,'' Zobrist said. "Guys start believing -- if we get one guy on, we'll get two guys on and it's gonna keep going. It doesn't happen every day that you get five hits in a row, or you're able to put together rallies late in the game against good starters and good bullpens. But we've been able to do that the last few times.''

Keep the line moving. Back-to-back singles by Cain and Hosmer pulled Kansas City within two runs at 3-1. An RBI groundout by Kendrys Morales narrowed the gap to 3-2, and Mike Moustakas' RBI single tied it at 3-3. The normally stoic Alex Gordon capped an eight-pitch at-bat with an RBI double to the gap to put Kansas City up 4-3, and he celebrated by pumping his fist at second base. Gordon said he was inspired when a fellow emotional flat-liner, Alex Rios, went crazy after producing the go-ahead hit in the finale of the Houston series. "I figured I'd join the club,'' Gordon said.

The Royals are an offensive anomaly in an age when making contact seems like a lost art. They struck out a major-league-low 973 times during a season in which no other club whiffed fewer than 1,100 times. They also walked a major-league-low 383 times. In terms of pure contact-hitting acumen, they're like nine Placido Polancos at times.

Their leadoff hitter, Alcides Escobar, has a .298 career on-base percentage and an affinity for swinging at the first pitch. But it's working. Their No. 9 hitter, Rios, produced a mere 28 extra-base hits in 385 regular-season at-bats. But he has contributed two monster hits in the past week. As a batting order, and as a unit, the Royals have embraced the mindset that it's not unmanly to choke up and go the other way with two strikes. When a team puts the ball in play somewhere, it's always possible that BABIP magic will ensue.

With their flair for comebacks, the Royals have made Dale Sveum proud, generated excitement among the fan base and rattled the favored Blue Jays a little bit as the series shifts to the Rogers Centre for Games 3, 4 and 5.

Will the magic run out at some point and the rallies end? Quite possibly. But the Royals will never go down quietly. They've become the living embodiment of what can happen when a team believes. 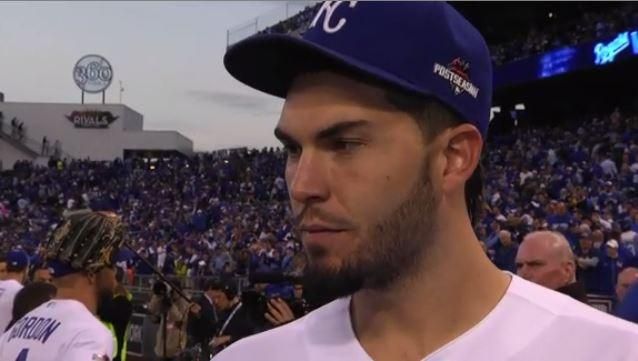