KGO
By Laura Anthony
PLEASANT HILL, Calif. (KGO) -- A community is in mourning Monday after two teens were killed and a third seriously injured in a weekend crash in Martinez.

"She was perfect. She was my perfect match." That's how her boyfriend described Marley Heim, killed in an early morning accident Sunday after the car she was riding in hit a tree along Franklin Canyon.

"Now she's not going to be here anymore. She would always text me making sure I was OK, she would always remind me that she loved me," Smith's cousin, Natalie Culver, said.

Cousin of 15 yr old Lauren Smith: "She would always text me...tell me she loved me." Smith killed in weekend ax. pic.twitter.com/qqDNARnP8m

The only survivor was the 16-year-old driver, who told first responders she thought she fell asleep and last remembered going about 60 miles per hour. There were no skid marks.

The CHP confirms the driver had a provisional license, meaning she should not have been driving after 11 p.m. and with other young people in the car.

"That law is put into place to help safeguard these young drivers, but it's not a cause for the traffic collision," CHP's John Fransen said.

All three girls were friends and classmates at College Park High School.

"It's a great tragedy that happened, and both the staff and the kids are basically in mourning. Kids will walk down the hallway and they'll just start crying," Principal Paul Gengler said.

Though just 16, Heim was the head vaulting coach at Franklin Canyon Stables.

"She was probably one of the best little girls I've ever met. One of the sweetest ones," Heim's friend Katlyn Foreman said. 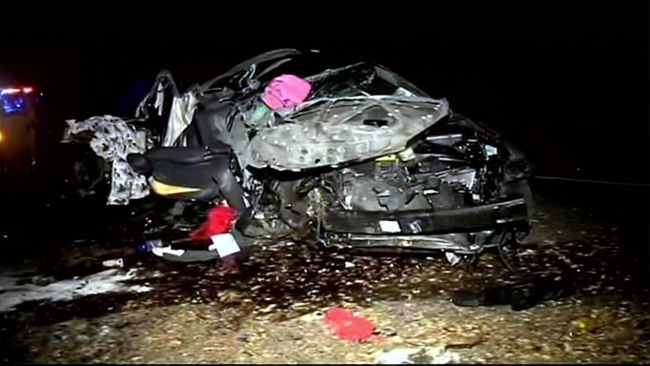