San Francisco yoga studio survives pandemic only to be burglarized 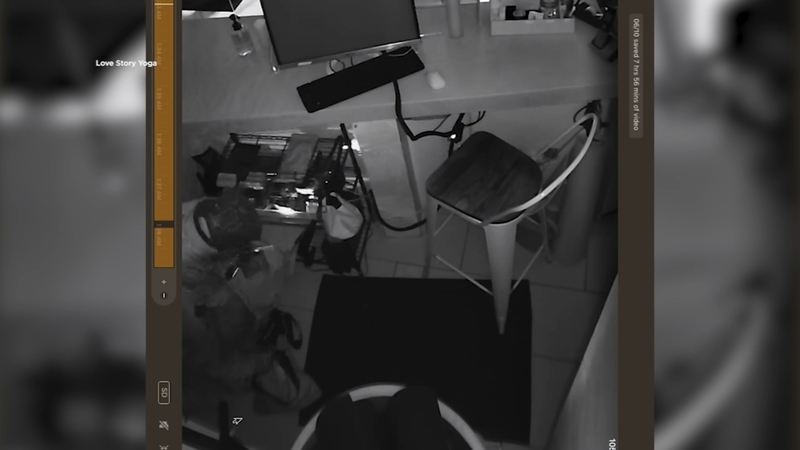 SF yoga studio survives pandemic only to be burglarized

SAN FRANCISCO (KGO) -- After barely surviving the pandemic, a San Francisco yoga studio in the Mission District took another blow after burglars broke in just days before California's reopening.

As California businesses reopen at full capacity, this isn't the story the owner of Love Story Yoga wanted to be telling.

"This past Thursday, June 10, there was a break-in here in the middle of the night at Love Story," said owner Stephanie Snyder.

Surveillance cameras captured two individuals break through the studio's padlock, open the security gates, break through a lock box and then let themselves in the Valencia Street studio with the key.

Most of that merchandise was branded Love Story Yoga.

"We were surprised to see that they would just take all of that," said Snyder.

Pineapple King Bakery in San Francisco is asking for the public's help after it was burglarized twice on the same day.

Surprised and saddened, Love Story Yoga is like many small businesses, especially yoga studios, that barely made it through the pandemic.

"We had to scrape and scramble and be creative and eek through to survive this long," said Snyder.

"It seemed like we could start to exhale and days into reopening we're burglarized. It just felt like a punch in the gut really for this to happen," she continued.

Snyder filed a report with the San Francisco Police Department and shared surveillance video with them.

"I hope that they get what they need so that they don't have to put themselves or others in that position again," Snyder said.

Whoever was responsible took the padlock, lockbox and key with them. Snyder changed the locks.

Despite the setback financially, Snyder and her students will get back on their mats and return to telling the story the studio was founded on.

A letter on the wall reads, "We created a beautiful space for you to dwell in. It is a small home built by the love, tenacity and unwavering acceptance that we've learned from you."

"You know we've been through so much, I suppose that's built some resilience," Snyder said.

A man was caught on camera stealing crabs from a fish tank at Giovanni's Fish Market in Morro Bay on Saturday.