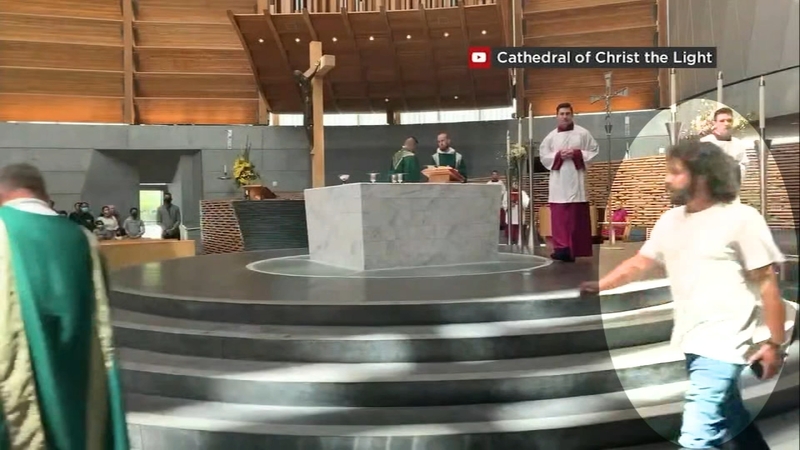 OAKLAND, Calif. (KGO) -- A man with a knife broke into the Cathedral of Christ the Light in Oakland on Sunday morning, yelling at a priest and disrupting mass.

The church says security was trying to keep the man out, but he got in through an open door and started yelling profanities at the clergy. Eventually, the priest was able to escort the man outside. No one was injured, but the incident is revealing a larger trend.

"We have had parishioners, mugged, assaulted, and robbed right in the area," says Father Schexnayder.

Schexnayder was not there on Sunday, but runs the Lady of Lourdes Church on the other side of Lake Merritt, one block away from the mass shooting on Saturday that left a 22-year old man dead, and seven others wounded as thousands of people were out along the lake.

So what does Father Schexnayder want to see as the Oakland City Council debates whether to move more money from the police to fund mental health and non-police intervention services?

"I would say both," said Father Schexnayder.

Oakland Police Chief LeRonne Armstrong says the city has had 61 homicides this year, a 90% increase compared to this time last year.

"This is not a time to have fewer resources; it's a time to be able to utilize every resource we currently have and hopefully be able to take advantage of some of the work that the Department of Violence Prevention is doing," said Oakland Police Chief LeRonne Armstrong.

But parishioners said they called 911 Sunday and no one showed up.

Armstrong says he's hoping to get more help from the federal government, warning response times could continue to increase if the city council decides to pull more funding.

"This is why it's so important that the department maintains the resources it needs not only to not only address violent crime but to address non-violent crime -- the issues that a lot of Oakland residents face every day that they see as problematic, as a nuisance to their lives. We want to make sure that we can address those issues as well," said Armstrong.

All of that will be at the heart of the debate tomorrow at the Oakland City Council meeting. The budget will need to be approved by the end of the month. In the meantime, Oakland police say they are increasing patrols near the cathedral this weekend.