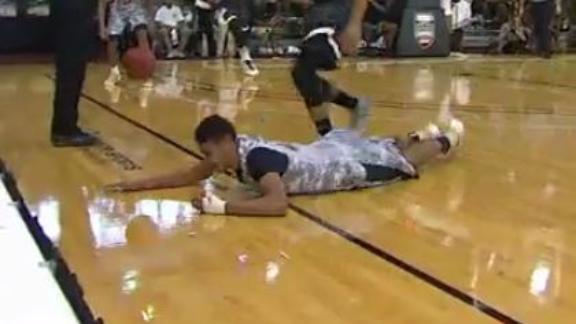 OKINAWA, Japan -- A moist, slippery court forced the cancellation of the Armed Forces Classic season opener between No. 9Gonzagaand Pitt on Saturday morning at Foster Field House on the U.S. Marine Corps base.

Prior to the first half ending, lead official Darron George told ESPN he would confer with Gonzaga coach Mark Few and Pitt counterpart Jamie Dixon at halftime if the floor didn't improve. The two teams came out for the start of the second half, with the Panthers leading 37-35. George met with the two coaches and determined the court was too dangerous to continue playing.

The game will not be continued at a later date, even though Few said somewhat in jest that he wouldn't mind meeting in Chicago or Kansas City during the season. Dixon said the Panthers don't have an open date and that as much as he wanted to resume the game, it was unlikely.

The stats won't be counted, either.

Organizer ESPN Events released a statement saying the game was called out of an abundance of caution after consultation with officials.

"We wanted to make sure we maintained a safe playing environment and because of the humidity and the slipping that occurred in the first half we wanted to exercise caution -- which is why we came to the decision that we did," ESPN Events senior director Clint Overby said in the statement. "We had a great experience in Okinawa. Our thanks to the Marines for being great hosts."

The temperature here was 79 degrees with 89 percent humidity Saturday morning after a rainstorm. There was no air conditioning inside Foster Field House, but large fans were in the corners of the court.

"It was bad,'' said Pitt's James Robinson, who suffered a laceration on his right cheek after losing his footing and falling on the floor face-first. "We got a feel when we came out for practice [Friday] but could tell it was slippery during warm-ups. It's unfortunate. This is such a great event. We wanted to finish it for them -- the real heroes. I wanted to play the second half. I had already played a half with the injury.''

Dixon agreed with the move, even though he was disappointed.

"The officials wouldn't let us [finish],'' Dixon said. "We came here for a win and we got half of that. Maybe we should get half a point in the RPI.''

Dixon said he did learn in 20 minutes that his team will play hard this season. The Panthers muscled their way to the lead late in the first half.

Gonzaga's Domantas Sabonis, who had suffered a back injury in an exhibition game last week, started the game but played cautiously. He said the humidity did loosen his back.

"Everyone was sliding back and forth,'' Sabonis said. "It was crazy. We all wanted to go fast but we couldn't. No one wants to get hurt in the first game of the season.''

This is the second time a game at a military facility couldn't continue due to a slippery floor. In 2012, Florida and Georgetown couldn't finish a game in Jacksonville, Florida.