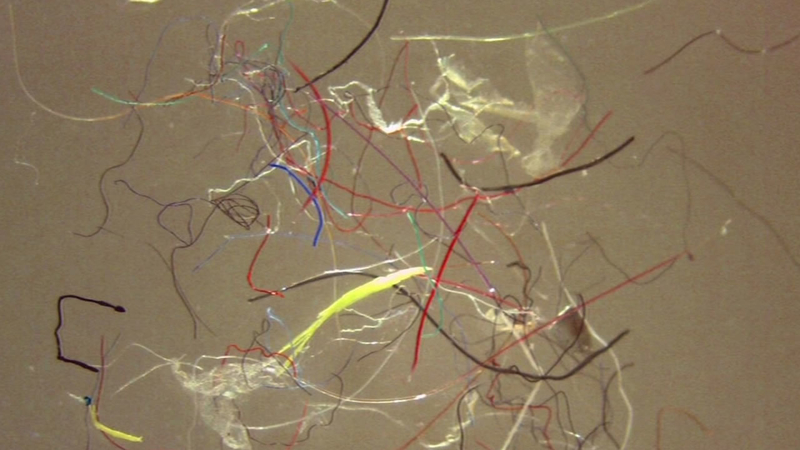 SAN FRANCISCO (KGO) -- There's growing evidence the fleece jacket that keeps you warm may also be contaminating San Francisco Bay and the ocean. Tiny plastic fibers, believed to come from manmade fabrics, are turning up in water and fish.

A first of its kind study by UC Davis researchers examined fish sold at fish markets or caught by commercial fishermen off Half Moon Bay.

UC Davis professor Susan Williams, Ph.D., said, "We hoped that we wouldn't find plastic in the fish guts, but we did. One in four fish that we sampled, sold for human consumption, has micro-plastic in it."

Williams says 80 percent of what they found was in the form of tiny fibers, believed to come from manmade fabric. More than half the clothing sold in the United States now is synthetic. Scientists believe the fibers are getting into water through our washing machines.

A study first published in the journal Environmental Science and Technology found that washing a single synthetic garment can generate more than 1,900 microfibers.

Rebecca Sutton, Ph.D., with the San Francisco Estuary Institute showed us how small the fibers can be; some are only visible with a microscope. Sutton's research found significant levels of plastic fibers in San Francisco Bay water. She says most of them are from polyester, acrylic and other common manmade fabrics. The fabrics shed the fibers as they are laundered, then the fibers are washed into the sewage system. Sutton also tested treated wastewater coming out of sewage plants around the bay and determined the plants are not able to filter the fibers out.

"I was frankly pretty stunned." That reaction is from Jim Ervin, compliance manager for the San Jose-Santa Clara Regional Wastewater Treatment Facility, the largest and most advanced in the Bay Area.

Ervin said, "I thought if anyone could clean out particles, we must do it. These fibers are so tiny that apparently they are either getting through or floating over [the filter mechanisms]."

He showed ABC7 News the spot where the treated wastewater runs out into San Francisco Bay. Ervin prides himself on how clean the water is and called the discovery of the fibers worrisome. He added, "There is no cheap, easy way to get rid of millions and millions of micro-particles."

The California Legislature recently voted to ban plastic microbeads used in facial scrub and toothpaste starting in 2020, but Sutton explained eliminating plastic fibers may be a lot harder.

Sutton said, "Synthetic fibers are very common, very useful. It would be hard to give them up. And yet they are generating a pollution problem that we are becoming concerned about."

Past studies at UC Davis have shown that fish fed plastic in laboratories accumulate toxins in their bodies. But Williams said we still need research on what is happening to fish that eat plastic in the wild and end up on our dinner plates. "What we don't know is whether the toxins in the plastic have gotten into the fish flesh, the fillets, in high enough concentrations to affect human health."

A spokesperson for the American Fiber Manufacturers Association says the Bay Area research deserves close attention, but there is "a large, complex chain of suppliers and processes" ... and there are "not enough science-based facts that clearly indicate what is happening."

Williams believes we may eventually need to test seafood for plastics, the same way we already test for mercury and lead.