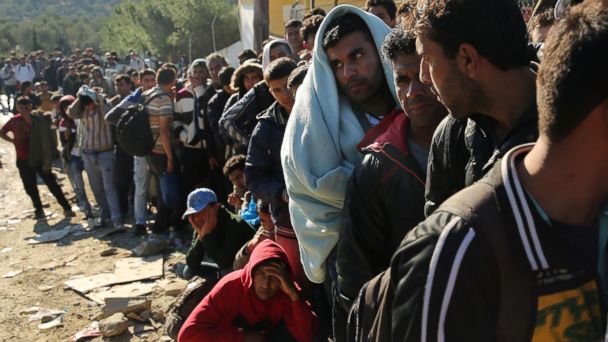 A Syrian refugee family who arrived in the U.S. last night after waiting three years to move to Indiana was denied entry into the state, according to a refugee immigration service.

Less than a day before the family was scheduled to arrive, the head of Indiana's division of family resources sent a letter to Carleen Miller, the executive director of Exodus Refugee Immigration in Indianapolis on Tuesday, saying that the state was seeking to have the arrival of the Syrian family and all future Syrian arrivals "suspended or redirected to another state that is willing to accept Syrian placements," The New York Times reported.

"My role is to create a welcoming environment here in our state that gives a safe haven to refugees," Miller told the Times. "That we can't be that because our state is not welcoming all is really painful."

Indiana Gov. Mike Pence is one of a growing list of governors who are refusing to take in Syrian refugees.

"Effective immediately, I am directing all state agencies to suspend the resettlement of additional Syrian refugees in the state of Indiana pending assurances from the federal government that proper security measures have been achieved," Pence said in a statement.

George told ABC News today he accepted the request to help the Syrian family of three -- a mother, father and their child -- find a home in Connecticut.

"We had to scramble a bit to find housing very quickly for them," George said, adding that the family will be placed into temporary housing until a long-term home can be found.

Connecticut Gov. Dannel Malloy said in a statement Monday that "if refugees -- many who are children fleeing a horrific, war-torn country -- seek and are granted asylum after a rigorous security process, we should and will welcome them in Connecticut."

George told ABC News that Syrian refugees "are the most heavily screened and documented refugees in the country" and that the vetting process "takes years."

"These people have been screened by Homeland Security and they should be welcomed here," he said. "It's the American thing to do. It's the right thing to do."

ABC News is respecting the family's wishes to remain unidentified "for fear that their families back in Syria may be put in harm's way," according to George.