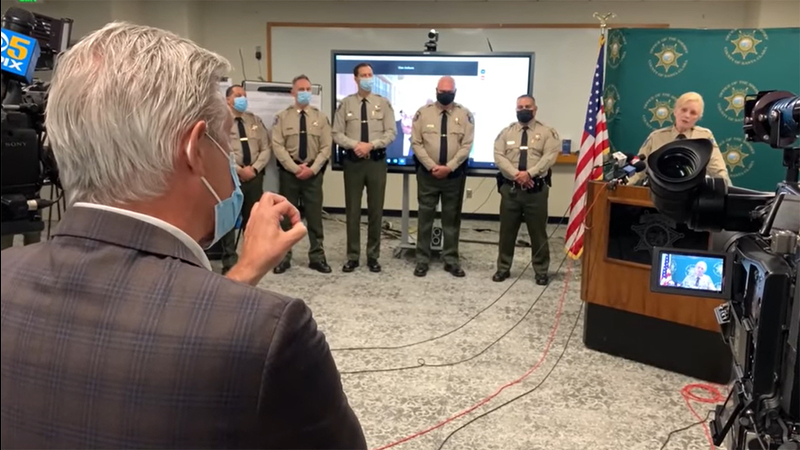 Smith had her command staff stand behind her, for this news conference one day after San Jose Mayor Sam Liccardo called on her to resign.

Liccardo said on Monday, "The time for concern is long past. Sheriff Smith must resign."

But, Sheriff Smith did not address the mayor's demand through her entire presentation. She bemoaned a lack of staffing, proposed building a new jail, even discussed how inmates are volunteering to paint the current jail. So, Dan Noyes finally had to bring it up.

"Sheriff, you still haven't addressed the mayor's call for you to resign. Will you resign?" asked Noyes.

"So, I didn't see his press conference, I have heard of it, of course. And, we're going to do these investigations, let's see what the truth is. At this time, no," said Sheriff Smith.

The 70-year-old said she has no plans to retire, even though two of her top staff have been charged in a bribery scandal, accused of demanding donations to the sheriff's campaign in exchange for concealed carry weapon permits. Laurie Smith refused to answer questions before the grand jury; Mayor Liccardo said that is enough reason for the sheriff to be removed.

"You know, I think that's a right everyone has, during the investigation, the DA's Office never asked me any questions, I didn't know what the investigation was about and that is my right and I'm glad that I did it," said Sheriff Smith.

"Did you know that your top aides were demanding campaign contributions in exchange for concealed carry permits?" asked Noyes.

"Do you believe that to be true prior to a trial?" asked Sheriff Smith.

"I'm asking you. Did you know that they were demanding campaign contributions for concealed carry permits?" asked Noyes.

"I don't think that has been proven," said Sheriff Smith.

"I'm asking you. Did you know? Or did you direct them?" asked Noyes.

"I'm not going to answer that because I have answered that," said Sheriff Smith.

Laurie Smith did get support today from an unlikely ally, attorney Paula Canny, who sued the sheriff and the county, earning multi-million-dollar settlements for the families of Michael Tyree, killed by jail deputies in 2015, and Andy Hogan, badly injured during a jail transport in 2018.

Canny told the news conference, "It is a fundamentally broken system, and so if you want to attack the sheriff for trying to do a job that jails were not ever intended to be treatment facilities for mentally ill people, you're going to have problems."

During this afternoon's County Board of Supervisors meeting, another major figure called on the sheriff to resign, Judge Ladoris Cordell, who chaired the blue ribbon commission for jail reform after Michael Tyree's death. Cordell told the board, "None of us, the correctional officers, the incarcerated, many of whom are presumed to be innocent, the community and our county leaders, should not have to put up with the Sheriff's ineptitude that borders on criminal indifference."

Then, the board voted to refer the matter to the US Department of Justice and the California Attorney General for investigation.

All this controversy is fueling those who would oppose Smith in the upcoming election. I've spoken to one of her former top aides, the county coroner, Kevin Jensen, who says he's planning a possible run for this coming June.