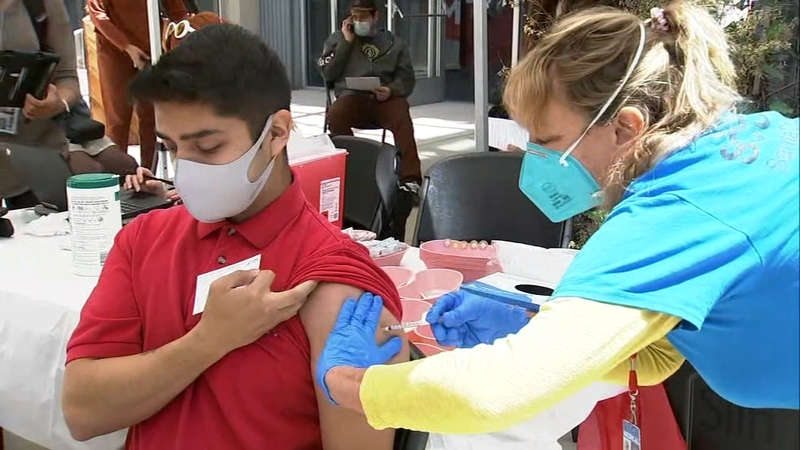 SAN FRANCISCO (KGO) -- On Tuesday, there was a sweeping push by one of the Bay Area's largest business groups. The Bay Area Council is asking companies to require COVID-19 vaccinations for both employees and customers.

Bay Area Council president and CEO Jim Wunderman acknowledged most business associations generally don't tell its members what to do. In fact, they often can't.

However, Wunderman said because of the highly transmissible Delta variant, the business group felt the recommendation was warranted.

"It's just a matter of safety and concern for your colleagues, your fellow employees, your family, your loved ones, friends, because you're a carrier," he told ABC7 News. "If you get this, you can transmit it. And what we've seen is this is a highly transmissible variant, much more so than it was initially."

"You really want to be very careful about this," he continued.

The requirement could impact private sector employers, businesses and customers.

"We were actually inspired by a number of our members who took this step. So, we weren't out in front of them. Actually, we were behind a number of them," Wunderman said. "We have other members who are sort of wondering what they should do."

School districts are doing everything they can to keep students safe but one piece is missing in the fight against COVID-19: Vaccinations for kids.

In a council press release, it announced, "Employers, including Council members Kaiser Permanente, Sutter Health, Google, United, Salesforce and Facebook, among others, already have begun to put in place vaccine requirements for their workforces and businesses."

Lyft, DoorDash, Instacart and more are among the Bay Area Council's member companies, as well as the Exploratorium.

RELATED: Honolulu to require vaccine or negative COVID-19 test at most indoor businesses

However, Wunderman said the business group's recommendation has already received some pushback.

"A few members asked questions, 'Why do we have to do this? Is this the proper role for the organization?'" he described. "You know, they worry about legal, potential legal hurdles. But you know, we feel we're on pretty good ground."

CSU recently announced students, faculty and staff must be vaccinated by September 30th to enter facilities across its 23 campuses.

The push to require mandates is gaining momentum.

"It makes sense with what we know about the vaccine. It makes sense, because we have seen that severe infections and deaths significantly reduced with the vaccine," Marcelle Dougan, an Assistant Professor at SJSU's Department of Public Health and Recreation said. "And so, it seems to fit."

"We've been leaders from the beginning in the country, and the results have shown themselves. We've had less cases, we've had less mortality, we've had less occupation of the existing ICU facilities," he elaborated. "That said, we've had surges. We're not by any means immune to this thing, just because we took more steps."

Dougan shared, "We need as many people getting the vaccine as possible, that way we can reduce the transmission. Because if we don't, then we have seen breakthrough infections. If there's a lot of virus in the environment, then infections will rise. And so as much as possible, as long as it is safe for people to take the vaccine, then they should."

The Council's recommendation excludes those with valid religious or medical exceptions. It also emphasizes the importance of continuing to follow to masking, testing, social distancing and other approved protocols.

"If it wasn't necessary, we wouldn't ask for it," Wunderman told ABC7 News. "We're not, I think, being over the top here. I think we're being rational."