ABCNews
By by Lana Zak
PARIS -- Nearly 200 countries have come together for the U.N. climate change conference in Paris and the fight on terror dominated the unofficial agenda.

World leaders gathered in Paris to fight a war on two fronts -- climate change and terrorism. "Some have asked why the world would dedicate some of our focus right now to combating climate change even as we work to protect our people and go after terrorist networks. Climate change affects all trends," he said.

The message reverberated as Pope Francis traveled back from Africa and urged even greater action, saying: "We are at the limits. If I may use a strong word, I would say we are at the limits of suicide," he said.

While world leaders met in Paris, the smog was so thick in Beijing, with pollution there 45 times beyond what is considered safe levels.

At the summit, Chinese President Xi Jinping pledged Chinese cooperation on climate and the war on terror.

That threat is palpable in Paris, where people are still reeling from the terrorist attacks that killed 130 people over two weeks ago.


Among world leaders, the fight against ISIS was as much a part of the discussion as the environment.

Obama hinted at a possible diplomatic breakthrough with Russia in regards to Syria. 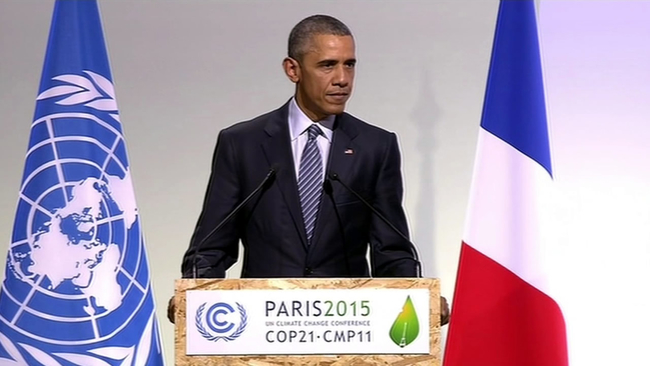