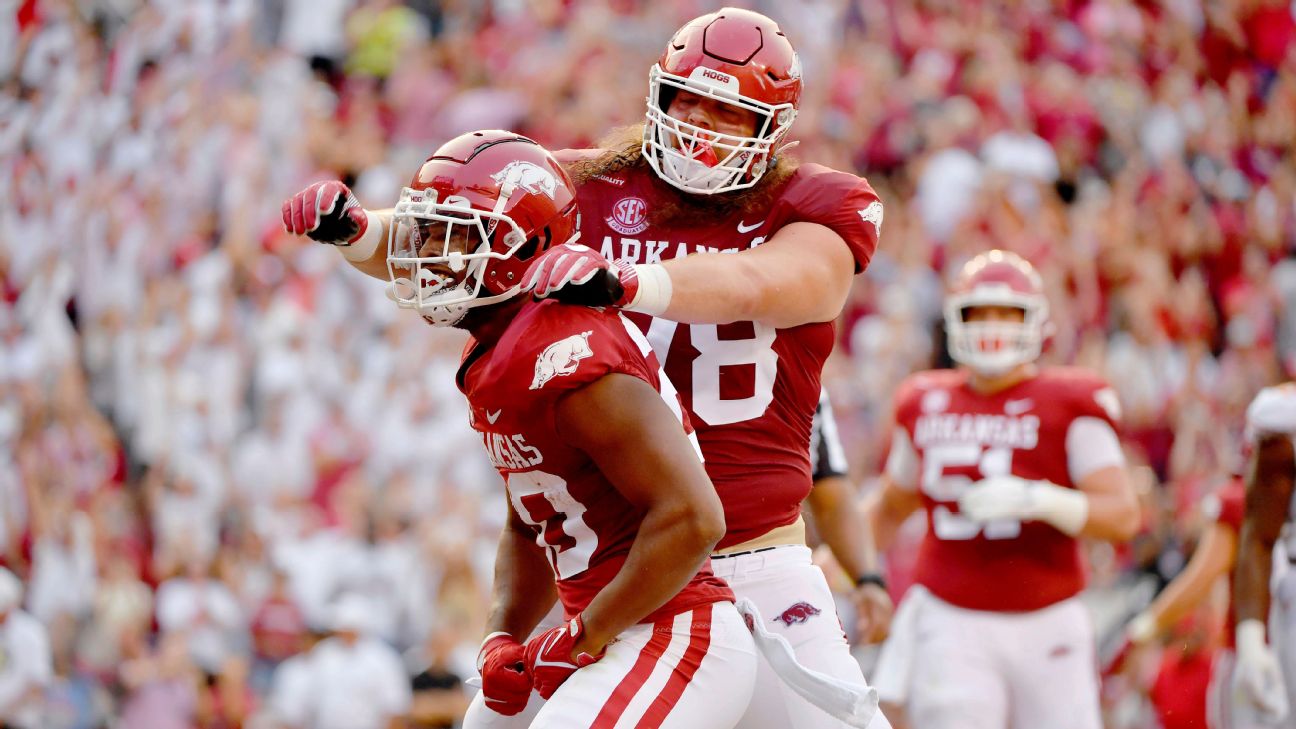 Week 5 in college football is here and we have a jam-packed slate of games, and there have been some big wins.

Most notably, Cincinnati took down Notre Dame for its first top-10 road win ever. Stanford knocked off No. 3 Oregon in overtime. Georgia shut out Arkansas 27-0, and Michigan was feeling it against Wisconsin and beat the Badgers 38-17. Alabama took care of business against Ole Miss in a 42-21 win. But there's still a lot of day and even more night left for some dramatic action to happen.


Check out all the results, reaction and revelry from throughout the land.

Play of the day

WOW! Calvin Jackson Jr. has got to be pretty proud of himself for this score.

What do you do when you beat the No. 3 team in the country? You make a meme, that's what. Stanford took down Oregon at home, and had plenty of fun with the win.

Cincinnati took down Notre Dame, and yeah, the Bearcats had thoughts.

Bonding over the things you hate.

Arkansas has a knack for clever postgame tweets, but since the Razorbacks didn't even put any points on the board, this is all they had.

SMU just has great marketing is what we're taking away from this. Seizing the moment, if you will.

What are the odds?

Stanfordhad a 0.1% chance to beatOregonwith 1:51 left in the fourth quarter, according to ESPN's Win Probability Model. Guess what?

Life of a mascot

Uga has quite the nice sideline setup, and honestly, we're jealous.

Big Al is out here just having a grand time against Ole Miss.

Before the game, Lane Kiffin said to have your popcorn ready, and well, looks like at least Big Al took some notes.

For more on the best trolls of Week 5, check this out.

Scene in the stands & sideline

We've got a few celebrity sightings this Saturday, like Waka Flocka arriving to the Kentucky game.

But the real party for Kentucky started a few hours later.


And look who showed up to Notre Dame -- Joey Chestnut himself.


Two important questions: Who is she? Can we be friends?

Speaking of that Tennessee trouncing ... nothing better than an in-the-moment sign.

Michigan just wants in on the fun.

Georgia fans have been going completely wild ever since kickoff against Arkansas, and it seems like they'll be hyped all game long with how things are going.

Just look at this sea of red!

Don't see this every day

Yes, all this really happened on one play.

And in more wacky plays, this blocked punt turned into a first down for Washington State.

From winning the Ryder Cup to being the guest picker, it's a pretty good week for Harris English.

Want to see all the best signs from GameDay? Check this out.

Now, we all know there is a lot of crossover between college football and the Bachelor franchise. Oh, you don't? A quick rundown: Matt James, the most recent Bachelor, played football at Wake Forest. One of his teammates at Wake Forest was Tyler Cameron, who was on season 15 of "The Bachelorette."

It was just announced this week that ESPN's Jesse Palmer would be the next host of "The Bachelor." Palmer was once the Bachelor back in 2004, so it'll be interesting to see what perspective he brings into the show's 26th season.

Ohio State has some fresh uniforms lined up for this weekend, and LeBron James is all about it.

Stanford is rocking a throwback look against Oregon.

And this is what the Ducks will be wearing against the Cardinal.

Want more on uniforms? Check this out.

NIL deal of the week

When your last name is Hamm, it only makes sense to sign a meat deal.

We don't even understand how Braylon Sanders hauled this in.

Is there anything that Chris Olave can't catch?

Khalil Shakir has some serious hops.

Good to see Darren Sproles back at K-State.

Not even exactly sure how Jordan Addison caught this.

And this form Jadan Blue is equally as impressive.

Everyone loves a little trick play, especially something like this flea flicker from Michigan.

Now, Mizzou might have gotten run out of the building by Tennessee, but that doesn't take anything away from this 100-yard kick return TD.

Turn on the jets, Tyron Evans!

Miami and Virginia played on Thursday this week, and this touchdown from Brennan Armstrong to Dontayvion Wicks is quite spectacular. A little risky. But impressive nonetheless. 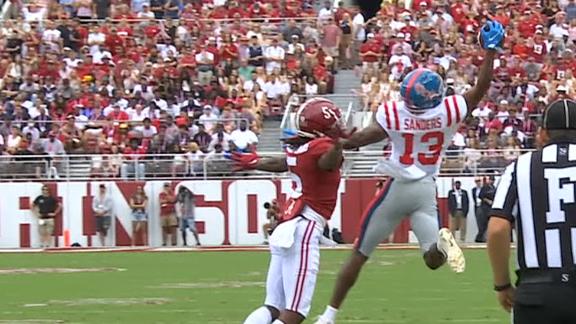 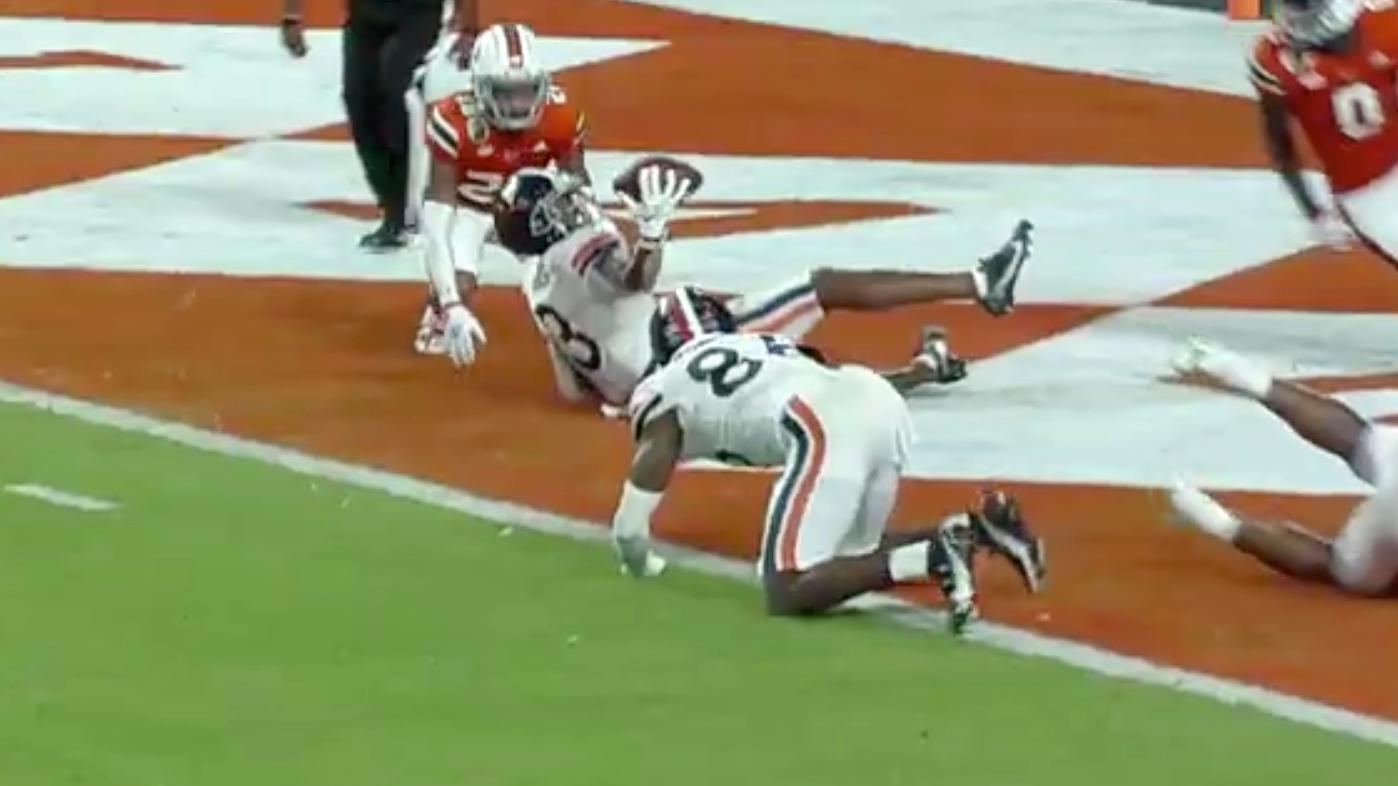 One of the most unbelievable TD catches you will ever see
Brennan Armstrong throws an ill-advised pass into heavy traffic that is dropped by the defense and somehow ends up in the hands of Dontayvion Wicks for a 36-yard Virginia touchdown. 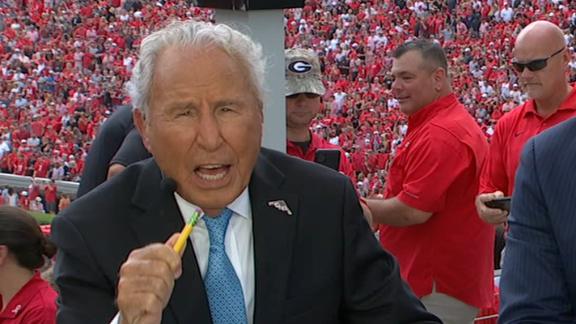 Corso's pick: Arkansas vs. Georgia
Lee Corso makes his headgear pick in the top-10 matchup between No. 8 Arkansas and No. 2 Georgia. 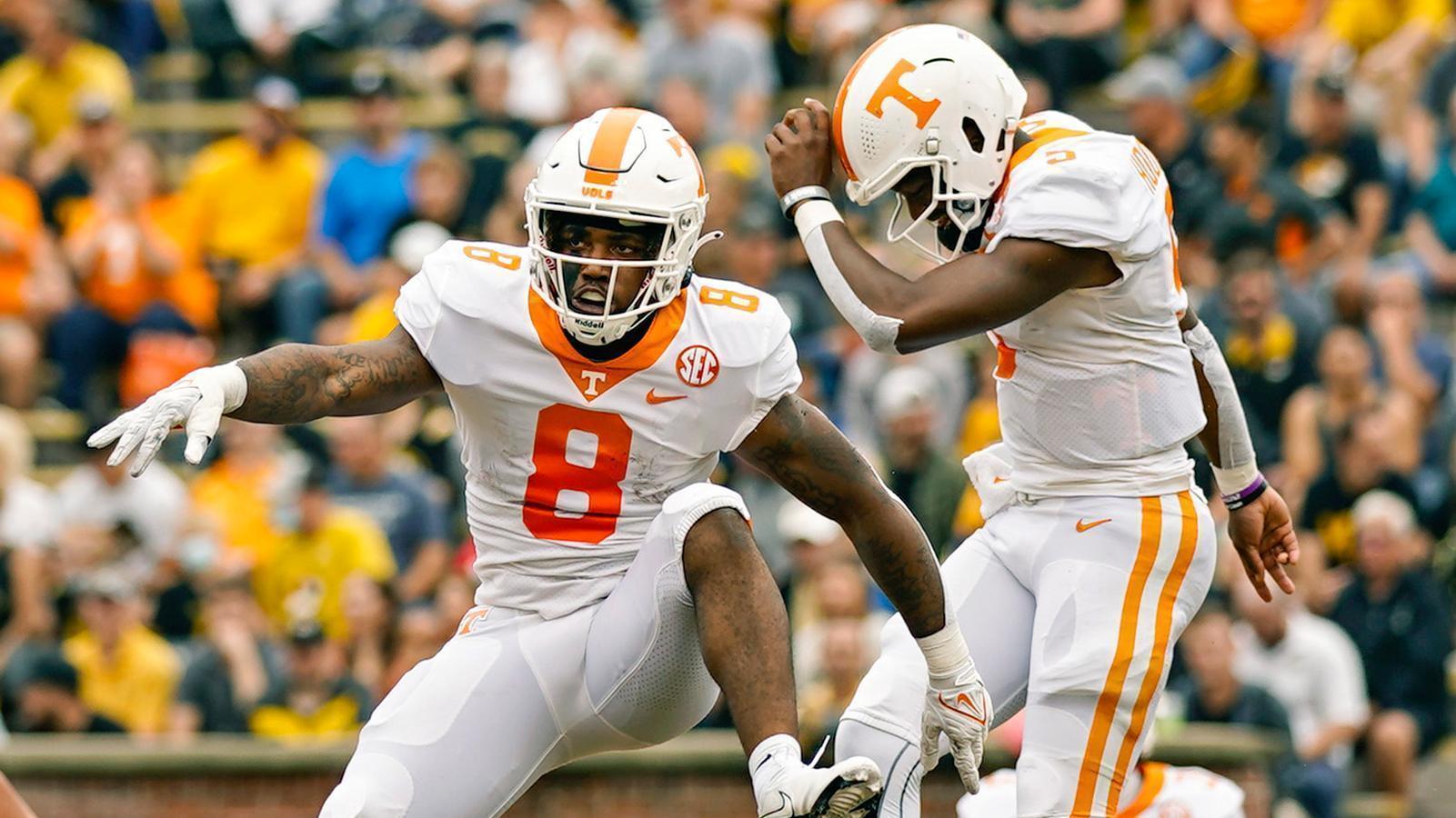 Tiyon Evans breaks free and runs 92 yards to the house
Tennessee's Tiyon Evans scores his second touchdown of the first quarter on a 92-yard run. 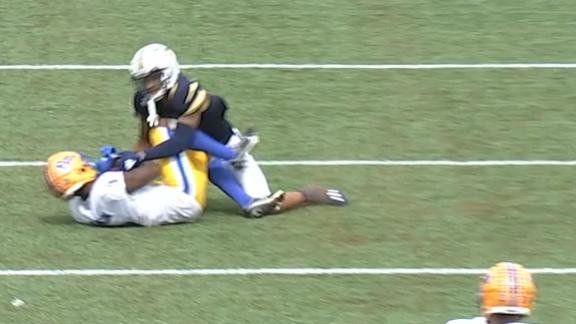 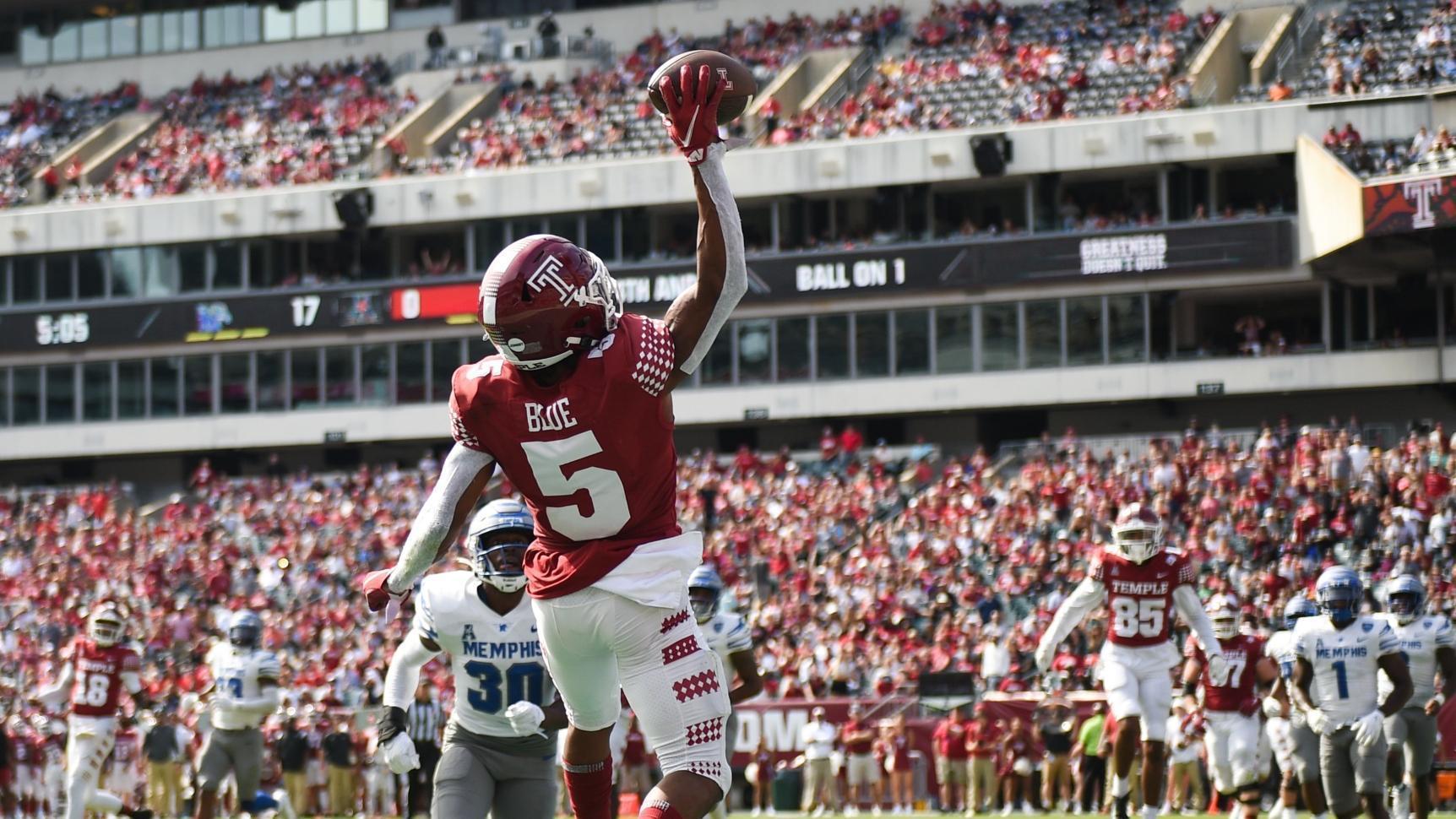 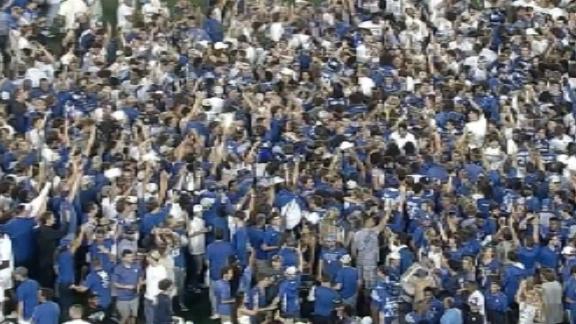 Kentucky storms field after upsetting No. 10 Florida
Kentucky stonewalls Florida on its potential game-winning drive to hold on and win 20-13. 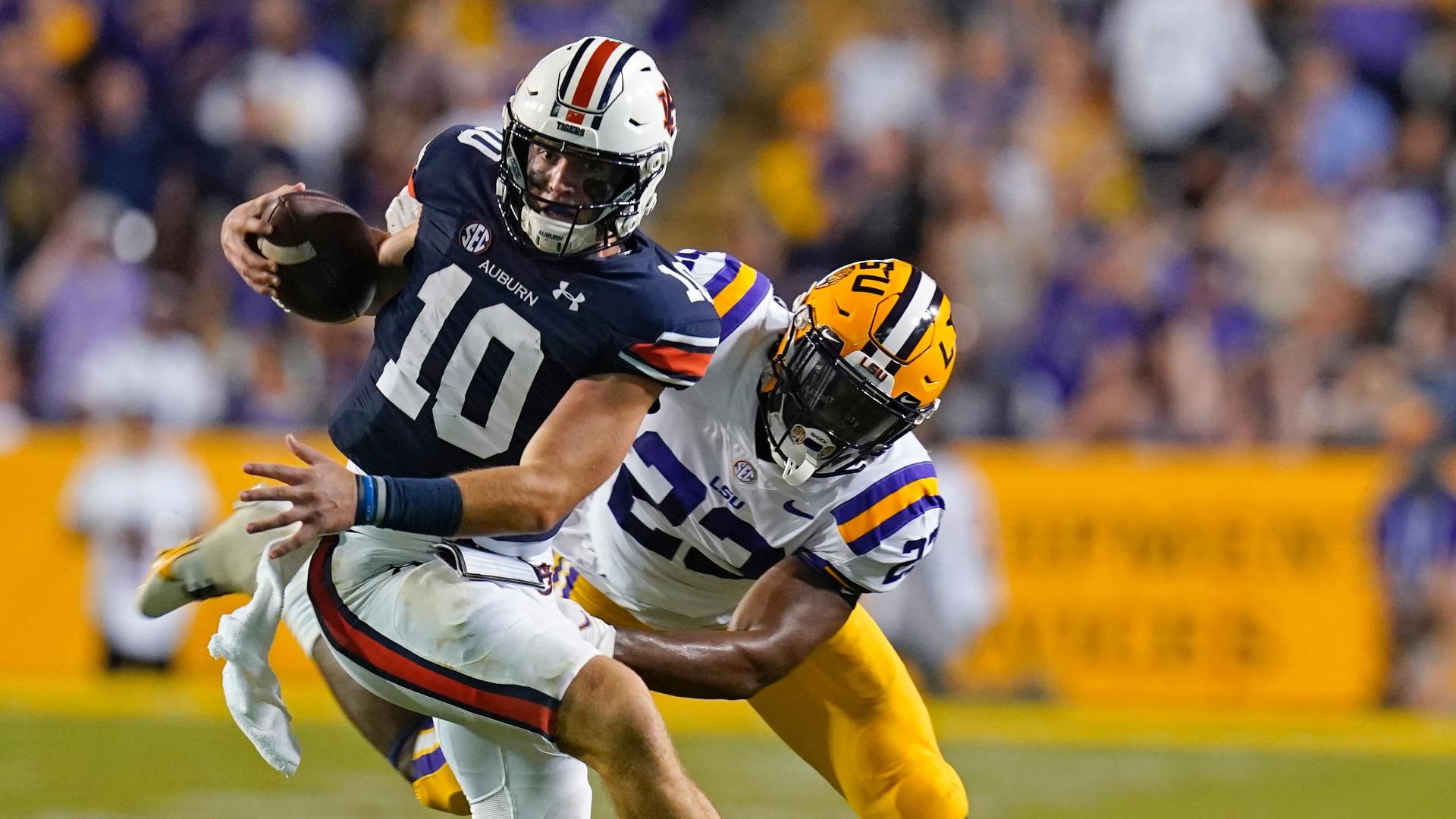