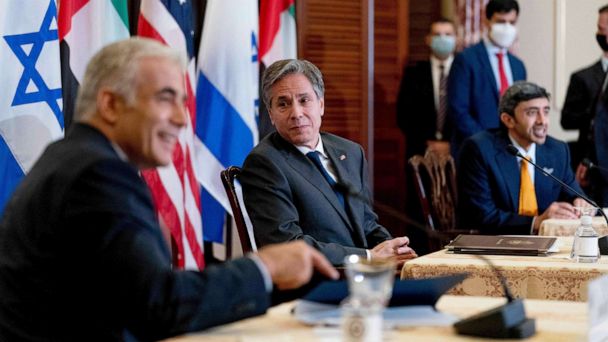 There have been major differences between the administrations of Donald Trump and Joe Biden on foreign policy -- not least over the Iran nuclear deal, with Biden officials blaming Trump's withdrawal for bringing Iran closer to a nuclear weapon today than before.

But even as Biden's top diplomat warned more starkly than ever about the threat from Iran and the need to salvage the nuclear deal Wednesday, there was some consistency: Secretary of State Antony Blinken embraced the set of key Trump-era deals known as the Abraham Accords.


Those historic agreements saw Israel establish relations with some of its Arab neighbors -- starting with the United Arab Emirates and extending, in varying degrees, to Bahrain, Morocco and Sudan.

The deals were controversial in some corners not just because they sidelined the Palestinians and did nothing to address long-simmering tensions there, but also because of the big-ticket incentives Trump offered to sweeten the pot for Arab countries, including selling the most advanced U.S. fighter jet, the F-35, to UAE; recognizing Morocco's claim to Western Sahara; and even offering to pay the Sept. 11 attacks victims to make legal claims against Sudan go away.

But with Israel's foreign minister and alternate Prime Minister Yair Lapid and UAE's Foreign Minister Abdullah bin Zayed Al Nahyan, Blinken heralded the agreements during a meeting at the State Department Wednesday. He announced the two countries, along with the U.S., was expanding the Abraham Accords with two new working groups on religious co-existence and water and energy -- and said the Biden administration is looking to add other countries to them, too.

"Normalization is profoundly in the interests of the people in the countries in question and is providing all sorts of new opportunities," Blinken said during a press conference with Lapid and bin Zayed. "It simply means that people will have a better life, more opportunity, more security, more prosperity."

So far, that hasn't been the case for Palestinians. Palestinian leaders were furious that the UAE, Bahrain and others abandoned a decades-old commitment to not recognize Israel until Palestinian aspirations for a state were granted. But Blinken, Lapid and bin Zayed said Israel and UAE's growing economic and people-to-people ties were an example for what could be possible for the Palestinians, too.

"The more of a successful UAE-Israeli relationship will be, that would not only encourage the region, but also encourage the Israeli people and the Palestinian people that this path is worth not only investing in, but also taking the risk," said bin Zayed.

Bin Zayed announced he would visit Israel soon "to meet a friend, but also a partner," he said, smiling over at Lapid, who made a historic visit to Abu Dhabi earlier this year.

For his part, Lapid -- who invited bin Zayed to his house and said his wife was ready to cook for him -- added that Israel was now focused on making the existing Abraham Accords successful, while working to expand them to other countries, "including ones you don't think of," he added with a smile.

He had little to say about the Palestinians, however, adding during his opening statement, "All people are entitled to a decent way of life. This includes of course the Palestinians. Our goal is to work with the Palestinian Authority to ensure every child has that opportunity."

Blinken reiterated the Biden administration's support for a two-state solution and called for both sides to "enjoy equal measures of freedom, prosperity, democracy," But he backed normalization as a way to get there.


"We believe normalization can and should be a force for progress not only between Israel and other Arab countries in the region and beyond, but also between Israelis and Palestinians," he said.

To pursue that progress, he also made clear the U.S. is "moving forward" with reopening the American consulate in East Jerusalem, which has traditionally served as a de facto embassy to the Palestinians. Israel, which largely has control as host country, has vocally opposed the move, including in comments by Justice Minister Gideon Saar Wednesday, who said Israeli Prime Minister Naftali Bennett agreed, "No way."

Beyond that disagreement, there was another critical difference on display Wednesday over the growing threat of Iran's nuclear program.

He once again declined to put a timetable on it, but in perhaps his strongest language yet, said the U.S. and its partners are looking at "every option to deal with the challenge posed by Iran. We continue to believe diplomacy is the most effective way to do that, but it takes two to engage in diplomacy, and we have not seen from Iran a willingness to do that at this point."

Hours earlier, his special envoy for Iran, Rob Malley, said the U.S. must "prepare" for "a world in which Iran doesn't have constraints on its nuclear program" -- a world without a nuclear deal. The Biden administration is doing that "now in consultation with our partners from the region," he added during an event with the Carnegie Endowment for International Peace.

Those efforts were echoed in what Lapid said Tuesday after meeting National Security Adviser Jake Sullivan at the White House. The two "discussed the need for an alternative plan to the nuclear agreement," according to his office.

Both he and Blinken declined to spell out Wednesday what those potential plans may be, but Lapid implied it includes the use of force.

"Secretary of State Blinken and I are sons of Holocaust survivors. We know there are moments when nations must use force to protect the world from evil. If a terror regime is going to acquire a nuclear weapon, we must act, we must make clear that the civilized world won't allow it," he said.


When asked later about the use of force, he added, "by saying other options, I think everybody understands here, in Israel, in the Emirates, and in Tehran what is it that we mean."

But while Blinken said all three of them -- along with European partners -- agree that Iran must not be allowed to acquire a nuclear weapon, Lapid's language was even more stark. He urged less patience with waiting for Iran to resume nuclear talks. Those indirect talks between the U.S. and Iran have been on hiatus since June, with Iran's new government saying it must get its team in position first.

"Iran is becoming a nuclear threshold country. Every day that passes, every delay in negotiations, brings Iran closer to a nuclear bomb. Iran is clearly dragging their heels, trying to cheat the world to continue to enrich uranium, to develop their ballistic missile program," Lapid said, adding that Israel had not just a "right," but a "responsibility" to stop Iran from acquiring the bomb.

Blinken did not answer a question about use of force, saying again the Biden administration believes a "diplomatic solution" is best, but adding, "To be very clear, Israel has the right to defend itself, and we strongly support that proposition."

Other U.S. allies have joined in recent weeks in urging Tehran to resume those talks. The French Foreign Ministry said Wednesday the situation had reached a "crisis and at a critical moment for the future of the nuclear agreement," blaming Iran for "refusing to negotiate" and creating "facts on the ground that further complicate the return to the JCPOA," an acronym for the nuclear deal's formal name.

Enrique Mora, the European Union's second highest-ranking diplomat who has coordinated those talks, said Wednesday he was traveling to Iran to "raise the urgency to resume #JCPOA negotiations in Vienna. Crucial to pick up talks from where we left last June to continue diplomatic work."

But in the meantime, the U.S. is urging immediate action on another front -- the release of American citizens detained by Iran. Both Blinken and Sullivan met Wednesday with Babak Namazi, whose brother Siamak and father Baquer Namazi have been detained by Iran for six years -- to the day -- and 5 1/2 years, respectively.

"The Iranian government continues to subject the entire Namazi family to unimaginable abuse. Through it all, the Namazis have shown remarkable courage," Blinken said in a statement afterward. "The United States is committed to securing Siamak and Baquer's freedom as soon as possible, as well as that of the other U.S. citizens wrongfully detained in Iran."

Jared Genser, a lawyer for the Namazis, filed an urgent appeal with the United Nations last week to call for Baquer Namazi's immediate release so he can have a lifesaving surgery on a major blockage in his right carotid artery.