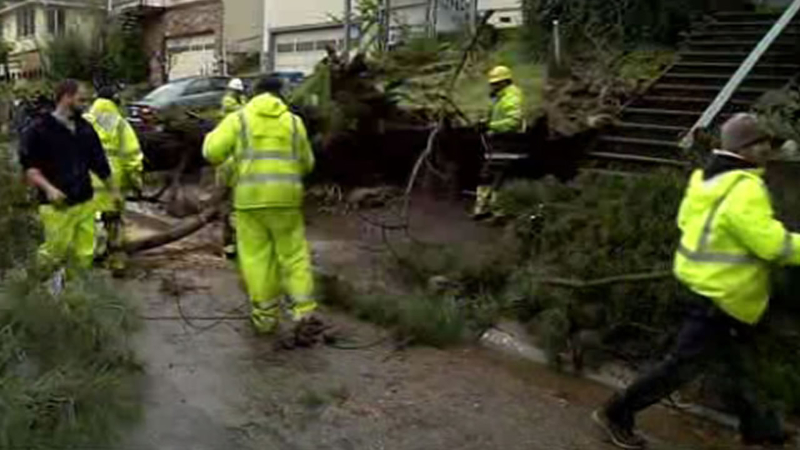 BELMONT, Calif. (KGO) -- On the Peninsula, the city of Belmont got hammered. Crews responded to five fallen tress within a few hours of each other.

One pine tree landed on a car and a house on Hillman Avenue.

"This is a Monterey pine tree and it's near the end of its natural life cycle, and with the stress of the drought for the last several years, it just became a victim and toppled over," explained Daniel Ourtiagu, with the City of Belmont.

The homeowner was inside, but was not hurt. In fact, the fallen tree did little damage.

Neighbors were worried about a second larger tree falling.

Not far from there, a section of Ralston Avenue was closed to traffic.

Crews in Belmont responded to 5 calls of fallen trees, 3 were on Ralston Ave. #bayareastorm @LiveDoppler7HD pic.twitter.com/NngAOJAGj2

The gusting winds and saturated ground forced several trees down.

Meanwhile, once the storm passed, public works made sure the city's sewer drainage system was clear.

If fallen trees were a problem in Belmont, accidents on Highway 101 along the Peninsula were causing major delays.

Just before midday, fire fighters and CHP officers responded to a three-car crash just north of 380. Among the passengers was a little boy.

The car he was driving in went off the road, crashing into bushes. Fortunately, he was in a car seat.

"People need to realize that the roadways are still wet and while it may not be raining right now, it's still wet and need to slow down and drive carefully," said Art Montiel, with the CHP.

Since midnight, the CHP has reported 34 car accidents on all interstates and highways between Millbrae to Highway 85.

3-car accident on southbound 101 near 380. One toddler being looked at. #rain pic.twitter.com/HpedCDHXyi