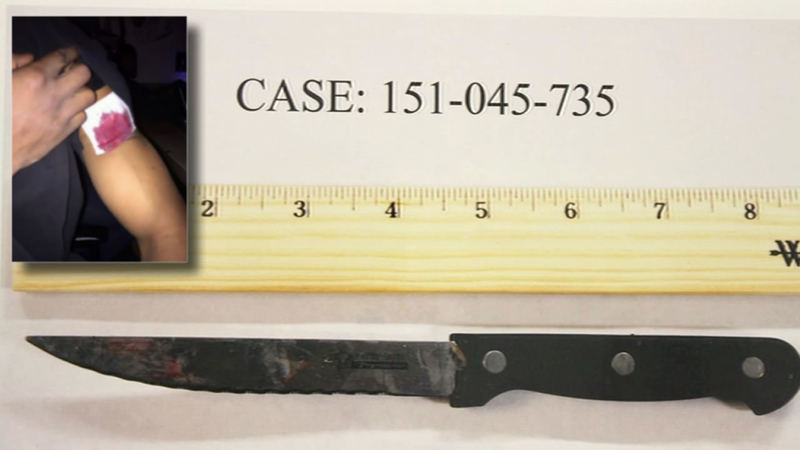 SAN FRANCISCO (KGO) -- For the first time, the man who says he was stabbed by Mario Woods tells ABC7 News what happened before the deadly encounter between Woods and San Francisco Police in December.

The stabbing victim does not want his identity revealed and he is being identified as Jacob. He's 26 years old, the same age as Mario Woods when he died. Jacob's story fills in the gaps of what happened early Dec. 2 and it also confirms to some doubters that there actually was a stabbing.

"I'm not even the one who called police. I'm the one who went to the hospital. That's the only thing I did," Jacob said.

Jacob told ABC7 News he had never met Mario Woods. He says he was sitting in a car chilling with two female friends and one of their children at Third Street and Laconte Avenue. A stranger outside seemed like he was on drugs.

"He looked like he was agitated about something and paranoid," Jacob said. "Mario started walking back and forth, started yelling stuff to us. He tries to open my car door and out of defense I already knew he had a knife on him. After a few blows were exchanged between him and me, I got stabbed in the arm."

The man Mario Woods is accused of stabbing before his death talks to ABC7news exclusively tonight at 4 and 6. pic.twitter.com/wh2CkuvYXY

A sheriff's deputy took a report. Police officers went to the scene and witness pointed Woods out. The shooting would be caught later on cellphone video. "I didn't even know he got shot and killed till the next day," Jacob said.

Since then, Jacob's life has been in shambles. He's afraid some people may want to harm him because the stabbing led to Woods' death. "My arm may never be the same again. You know, I have nerve damage and all kinds of stuff. I have anxiety attacks," Jacob said.

Jacobs says he is the forgotten victim, the victim protesters have forgotten. "I acknowledge what they're doing trying to get justice and everything, but at the same time you have to realize there are victims of black on black crimes that I don't feel they acknowledge," Jacob said.

What also disturbs him, the Day of Remembrance that the Supervisors passed for Mario Woods. "I'm looking at this, I'm a victim of this whole situation and I haven't heard anything from the supervisors even acknowledging the fact that you know, whatever happened," he said.

Through all this Jacob feels sad for Woods' family. He too has children. "I'd just like to say to Ms. Woods, my heart goes out to you," he said. Jacob says at some point, he would like to meet Woods' mother when the time is right.

He didn't want to comment on the officer-involved shooting because he wasn't there. All he wants to do at this point is to keep a low profile and get his life back together again.