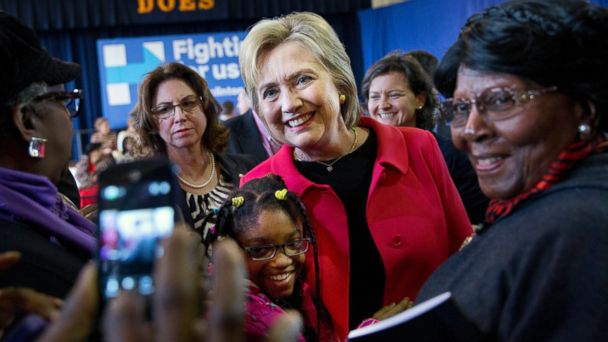 DENMARK, S.C. -- Anyone who missed Thursday's Democratic debate in Milwaukee could have tuned in to Hillary Clinton's event in South Carolina for the highlights.

In fact, it might have been clearer what she was trying to accomplish.

Lines met with gentle nods in Wisconsin were greeted with vigorous applause Friday by the residents of Denmark, South Carolina, a rural town with a population of less than 4,000. At the heart of her message was a phrase that Clinton repeated multiple times during her remarks.

"I want you to understand, I will not promise you something I cannot deliver," Clinton said. "I will not make promises I know I cannot keep."

The pragmatic vow was a subtle dig at her opponent Bernie Sanders, who has campaigned on platforms of free college and universal healthcare. But it also functioned as a reminder to communities like this one - rural, poor, and overwhelmingly African American - that voters here have been burned before. In 1993, Denmark's local school district was one of 39 to file a lawsuit against the state for underfunding rural areas. It took more than 20 years for the case to be resolved; in the meantime the area became known as the "Corridor of Shame."

"We are going to turn this 'Corridor of Shame' into the 'Corridor of Opportunity,'" Clinton proclaimed, reminding the crowd of her 40-year-old ties to the state.

In 1973, she recalled, she traveled around Bamberg County, compiling research for a report on juveniles being placed in adult prisons. Clinton unveiled a new plan to dedicate $125 billion to infrastructure and job creation among poor rural areas, with an emphasis on communities of color.

The message resonated with voters, who seemed to give Clinton's promises the benefit of the doubt.

"She's being real, and that's what we need," said Annie Rowe, a Denmark resident who is studying to be a medical assistant. "Everybody makes promises, you've got to live up to them."

Her colleague, Angelan Wise, added that Clinton seemed to care about their community. "People are always saying 'I promise to do this and I promise to do that,'" she told ABC News. Of other politicians, she said, "you want us to vote for you, but then you don't come and explain what you're going to do for us, for African Americans."

To some, Sanders' image has remained that of an interloping outsider. Asked what they thought about the Vermont senator, each woman shook her head.

"I don't really know him that well," said Wise.

Since crushing Clinton in New Hampshire, Sanders has yet to announce his next visit to South Carolina, where a recent NBC/WSJ/Marist poll showed him trailing by a whopping 37 points. Unlike New Hampshire or Iowa, African Americans represent the majority of South Carolina Democrats.

And in a race in which Clinton's trustworthiness has repeatedly been questioned, voters here have seemed eager to give Clinton the benefit of the doubt - especially as she continues to tie herself to President Obama.

"I will also build on the progress that President Obama has made for our country," Clinton said, noting she had embraced the president's policies more tightly than Sanders.

It was a recycled talking point from Thursday's debate. But in South Carolina, the crowd cheered loudly.