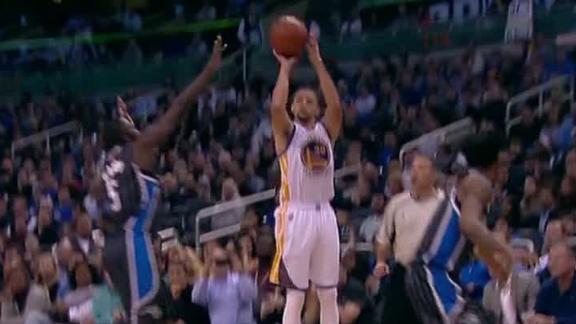 Golden State Warriors star Stephen Currybroke an NBA record with a 3-pointer in his 128th consecutive regular-season game on Thursday night and came up short of setting another.

The reigning league MVP made a 26-foot jumper from the left wing with 5:45 remaining in the opening quarter of Golden State's 130-114 win over the Orlando Magic.

"I knew about it," Curry told CSN Bay Area afterward of the consecutive-game record. "With something like that, you just play your regular game and just try to focus on the game and how to get my shots."

Curry, who finished with 51 points, had shared the mark with the Atlanta Hawks' Kyle Korver.Dana Barros' streak of 89 games was the league record prior to Korver's and remains third best.

"What record did he set? I don't know," Kerr said.

Kerr downplayed the streak by declaring that its significance is diminished because of the apparent ease with which Curry makes shots.

"Kyle Korver is a great shooter," Curry said. "It's nice to pass his record."

Curry hit 10 3-pointers in the win, falling two short of matching the single-game record. He scored 19 of his 51 in transition, making all seven of his attempts in that phase, according to ESPN Stats & Information.

"I have a hard time seeing how that streak is ever going to end. It would have to be kind of a fluke night," Orlando coach Scott Skiles said of the consecutive-game mark.

"The way he makes them is totally different from Kyle," Skiles added. "Kyle is sprinting off screens and it's possible you could switch out and maybe take some away from him, whereas Steph, there are so many of them off the dribble and from 30 feet and fading away. ... He'd just have to be off that night, and that certainly doesn't happen very often."