KGO
By by Katie Marzullo and Cornell Barnard 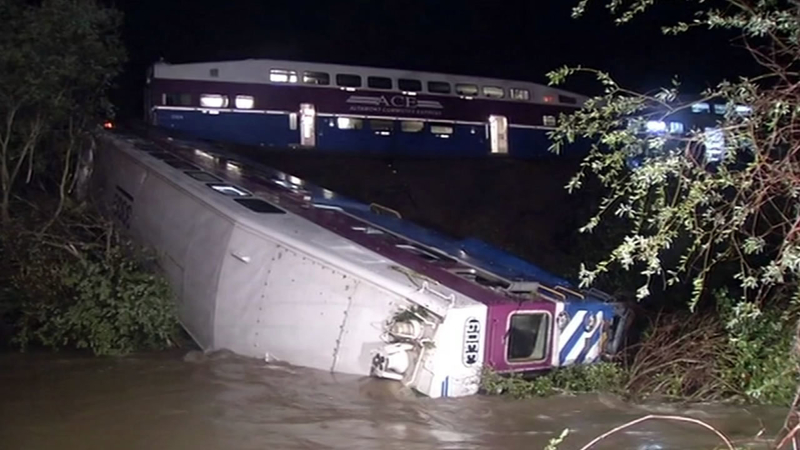 SUNOL, Calif. (KGO) -- Alameda Fire Department officials said 14 people were injured, four seriously, when a commuter train traveling from Silicon Valley to Stockton in Central California derailed after hitting a tree that fell on the tracks Monday night. There were no reports of any fatalities.

Nine of those people were transported to the hospital. 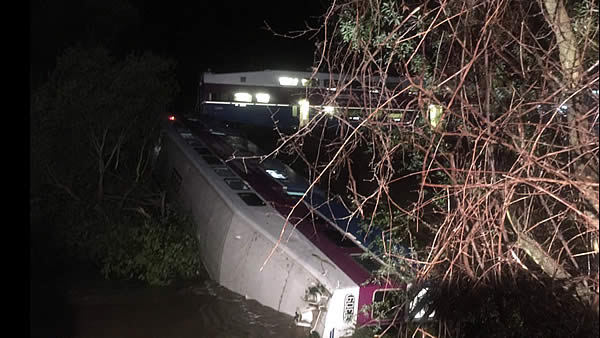 ABC7 News spoke with an Alameda County fire captain who made up a secondary search team along with others, combing through the derailed car for anyone who might have been missed. "You're focused, you're trying to do the best job you can, looking at all the void spaces and you're really hopeful that there's not anybody there, but you're double checking that everything is right and safe," Alameda County Fire Department Capt. Seth Anderson said.

ABC7 News spoke to a witness who was in the back of one of the trains and he said it felt huge jerks while he was sleeping and that woke him up.

Passengers who evacuated the train walked two miles down the tracks to a waiting area off Niles Canyon Road where they were given blankets while they waited for shuttle buses to pick them up.

Many said the tracks sounded strange right before the crash, almost silent. The impact of the crash sent passengers flying inside the car, which derailed. "At that moment I realized something was wrong, so I held onto the rails and right then the train flipped over," passenger Jay Vijayen said.

Fremont police said Niles Canyon has been closed as several agencies investigate the collision involving a commuter train in the canyon.

According to ACE Train, there will be no service on Tuesday due to the derailment.

attention all ACE passengers. There will be no service tomorrow 3/8/16. No ACE train will be operating tomorrow. Thank you.

Around 8:40 p.m., Alameda County Fire Department officials tweeted that all passengers were removed and are being assessed.

The uninjured passengers are being transported to the Alameda County Fairgrounds in Pleasanton where they can be picked up.


Fremont FD says train hit a tree that had fallen onto the tracks. 1 car went into the creek. @abc7newsBayArea pic.twitter.com/MswCsBivnH

#UPDATE: All uninjured #ACETrain passengers being taken to Alameda County Fairgrounds where they can be picked up. https://t.co/p5VDI4qbsx

On scene at #train derailment in #Sunol. I'll tweet info as soon as I have it. @AlamedaCoFire @abc7newsBayArea pic.twitter.com/CxCWBUR0Kg

Sunol Update: all passengers have been removed from derailed train & are being assessed.

Holy S. #AceTrainDerailment emergency responder are getting all our names pic.twitter.com/Fl8HHwUqJM

Ace 10 has been derailed in Niles Canyon. Emergency personnel has been dispatched. https://t.co/XrVw221xgq