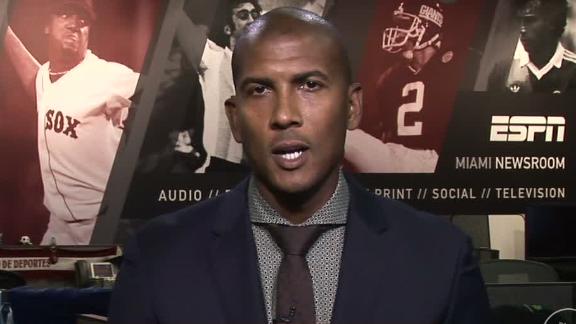 MIAMI -- The NBA saidDwyane Wade was not fouled on Miami's final offensive play of the Heat's loss to the Charlotte Hornets in Game 5 of the teams' Eastern Conference first-round series.

Wade thought he was fouled with 2.6 seconds left, as he tried to tie the score while being defended by the Hornets' Cody Zeller and Courtney Lee. No call came, and the Heat lost 90-88.

Miami trails the series 3-2 going into Game 6 on Friday at Charlotte.

"Look, it never is decided by those plays, but from my vantage point, Dwyane certainly looked like he got fouled," Heat coach Erik Spoelstra said after the game.

Asked if he had seen a replay, Spoelstra said, "I don't need to. He got fouled."

Wade was even more succinct.

"There's no reason for me to look at it," he said. "It ain't going to change anything. I thought I did [get fouled]. It wasn't called."

The league's review of events in the final two minutes of play states that the Heat did not foul Zeller on an inbounds play in the final seconds, another call Miami wanted before time expired.

"I don't know if Cody got fouled or not," Hornets coach Steve Clifford said after the game, "but it works for me."

The NBA said it releases the reports in an effort to be transparent and because it received inquiries from teams and media about certain calls in close games.

"It's important that we're completely transparent and we get the information out there and people understand that we're upfront about it and we admit mistakes," Kiki VanDeWeghe, the NBA's executive vice president of basketball operations, said Thursday. "But also, it's important not only for the referees but for the teams and everybody else that we also talk about the ones we got right."

The league reviewed 26 events down the stretch of the Miami-Charlotte game Wednesday. In addition to the no-calls on Wade and Zeller, Leeargued he had a shot goaltended by Wade with a minute left.

In all three of those instances, the NBA said it got the calls correct. The NBA said Lee made "minor contact" with Wade's arm but not enough to merit a foul.

"To be honest, I don't even look at them," Spoelstra said Thursday, a few hours before the league's review was released. "That doesn't help if they disagree and say it should have been a foul. What's that do? You just become frustrated. Or if they disagree with you, you can go down that rabbit hole of 'How do you not see it that way?'"