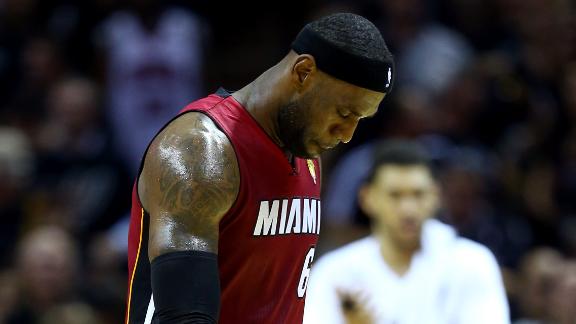 With LeBron James and Carmelo Anthony officially opting out of their contracts, multiple teams have begun the process of exploring roster moves that would create sufficient salary-cap space to sign 2014's marquee free agents in tandem this summer, according to sources close to the situation.

In addition to the Miami Heat's obvious desire to retain James by any means necessary and pursue Anthony if he urges them to do so, sources told ESPN.com on Tuesday that the Cleveland Cavaliers and Atlanta Hawks are among the teams mulling potential trades designed to clear enough cap space to be able to recruit the two stars and close friends.

The Los Angeles Lakers, meanwhile, had begun exploring such machinations even before the opt outs of James and Anthony had become known, according to ESPN.com's Ramona Shelburne.

The Lakers have been trying in recent days to package the No. 7 overall pick in Thursday's draft with the expiring contract of Steve Nash (who's owed $9.7 million next season) to free up enough room to offer James and Anthony at least $16 million each next season to join forces with Kobe Bryant, Shelburne reported.

The Clippers would need to make several trades to clear enough room under the salary cap to make an offer to James, but as ESPN reported in February, if LeBron were to leave Miami, the Clippers would be among his preferred destinations because of the strength of their roster and his close relationship to Chris Paul and coach Doc Rivers.

Paul is one of James' best friends, and the two have talked about playing with each other since they were in high school, when they met on the AAU and prep all-star circuits. Paul is godfather to James' son Bryce, and they were in each other's weddings.

The Clippers have $76 million committed in salaries for next season. That figure will decrease to $71.7 million after Darren Collison, Glen Davis and Danny Granger opt out of their contracts for next season, meaning the Clippers would have to trade some combination of prized young center DeAndre Jordan ($11.4 million), Jared Dudley ($4.25 million) and Matt Barnes ($3.4 million) to facilitate a deal.

Jordan's stature grew tremendously around the league last season, and sources indicate the Clippers have been reluctant to entertain any trade call that mentions him. Paul and Blake Griffin are considered untouchable.

ESPN reported Monday that the Rockets have begun working on trade exits for center Omer Asik and point guard Jeremy Lin to clear enough space under the salary cap to make a representative offer to Anthony. That extends to James as well, but Houston can clear only enough space to sign one of them.

The Rockets have been confident for some time, sources say, that they can move both Asik and Lin if necessary to create the requisite flexibility while hanging on to Dwight Howard, James Harden and Chandler Parsons.

As of now, no team that is believed to have any sort of shot at luring James away from the Heat has enough cap space to add both him and Anthony at representative salaries. But more than 15 teams are projected to have significant salary-cap space this summer, raising the possibility that several will try to offload multiple players in conjunction with the draft to create flexibility in the same manner the Heat did in 2010 to make room for their historic free-agent class.

James' Heat teammates from that haul, Dwyane Wade and Chris Bosh, have until Monday to notify Miami whether they will follow suit and opt for free agency on July 1 or opt in for next season's salaries.

Sources say the timing of James making his opt out known six days before his deadline of Monday was done in part to give teams that may want to recruit him enough notice to pursue the needed roster alterations. This includes a Heat team less than two weeks removed from a lopsided NBA Finals loss to the San Antonio Spurs that had James calling for upgrades to the roster "at every position."

Last week, Heat president Pat Riley acknowledged that team officials had begun discussing the idea of trying to recruit Anthony to join James, Wade and Bosh on South Beach and turn Miami's Big Three into a Big Four, but Riley conceded that the ambitious concept was a "pipe dream" given the pay cuts it would require to make it happen.

Other teams, however, have been anticipating this contingency for months, which could lead to a flurry of activity around the league in conjunction with the draft and during the first few days of free agency in July, when teams can begin to formally pitch themselves to James and Anthony.

If the Lakers were to successfully shed the No. 7 pick and Nash's contract without taking any salary back, they could have more than $33 million in cap space to chase James and Anthony.

The Cavs, meanwhile, have numerous nonguaranteed contracts on their books and extra draft picks they could attach to players in trades to free up money. There are scenarios where the team believes it could clear in excess of $30 million in cap space without having to trade young star Kyrie Irving or the No. 1 overall pick in Thursday's draft, sources said this week.

But if Wade, Bosh and teammate Udonis Haslem follow James' lead and opt out of their contracts, Miami could create an NBA-record $50-plus million in cap space, which the Heat could use to remake their roster and include James and Anthony.

Atlanta has one of the most flexible rosters in the league, with multiple options to move attractive players to other teams to create space. The Hawks, however, have been somewhat reluctant to completely gut their roster as they hope to build off some success from last season.

James and Anthony have been friends since they met at a USA Basketball event in 2001 and, according to a recent report from ESPN's Stephen A. Smith, have expressed a mutual desire to play together on the same team full-time before their careers are over. James and Anthony are expected to be in contact during their free-agent process, since this is the first time they will have been unrestricted free agents at the same time.

In an interview with Vice Sports this week, Anthony said family considerations and the size of the market will be factors in where he chooses to sign this summer, which could affect the feasibility of certain teams being able to land both players.

Will LeBron Return To The Heat?
Tom Penn and P.J. Carlesimo offer their snap decisions on whether LeBron James will return to the Heat.

Better With Melo?
Would the Knicks be better off with or without Carmelo Anthony? David Thorpe says there's not much in it. Also, how would Anthony work on the Bulls, Heat or Rockets?

LeBron And Carmelo Together?
Stephen A. Smith discusses the possibility of LeBron James and Carmelo Anthony playing together starting in the 2015-16 season.