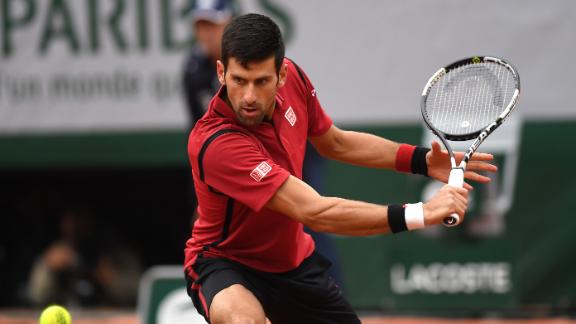 Still on target to win a fourth straight major title and complete a career Grand Slam, Novak Djokovic advanced to the semifinals at the French Open for a record sixth straight time.

The top-seeded Serb beat Tomas Berdych 6-3, 7-5, 6-3 on Thursday, a day after completing a four-set win over Roberto Bautista Agut.

"I'm very pleased to be in semifinals of another Grand Slam," Djokovic said after reaching his 30th major semifinal. "But because of the fact that I have to play every day, my focus right away goes for recovery and the next match. I don't have much time."

Djokovic will next face No. 13 Dominic Thiem. The Austrian beat No. 12 David Goffin of Belgium 4-6, 7-6 (7), 6-4, 6-1.Djokovic has defeated Thiem in both of their career meetings, last sweeping him in two sets at the Miami Open in March.

A French Open victory would give Djokovic a 12th major title -- two less than Rafael Nadal -- and four consecutive Grand Slam titles, something no man has done since Rod Laver won all four in 1969.

After winning the first two sets Thursday, Djokovic was even with Berdych at 3-3 when they stopped playing because of rain. When they returned, Djokovic won the next three games and the match.

Berdych felt the stoppage cost him valuable momentum and was scathing about the decision to come off in conditions he considered were exactly the same as for most of the match on Court Philippe Chatrier.

"That was one of the worst calls that I ever had on the court," the Czech player said. "We were playing two and a half sets in the light rain."

Berdych was also perplexed at the explanation he was given.

"When the referee came down and she told us 'We wait a few minutes, if it [the rain] stops or not.'" Berdych said. "I was like: 'Waiting for what? What's the point of this?' The court won't get better. It will get only get worse. We will be sitting in 10 degrees here, and there is no sense at all."

Berdych stumbled in his latest attempt to knock off Djokovic. He has now lost in 11 consecutive meetings with Djokovic and has dropped 12 straight against No. 1 players.

Celebrating his win, Djokovic called a ball boy onto the court, and the pair waved to each side of the stadium.

In the other match on Court Suzanne Lenglen, Thiem and Goffin were playing in the quarterfinals of a major tournament for the first time.The win gave Thiem his tour-leading 25th victory on clay this season.

Besides losing the match, Goffin also briefly lost control of his racket. After the first point of the tiebreaker in the second set, Goffin tossed the racket up in the air but failed to catch it, hitting himself in the face.