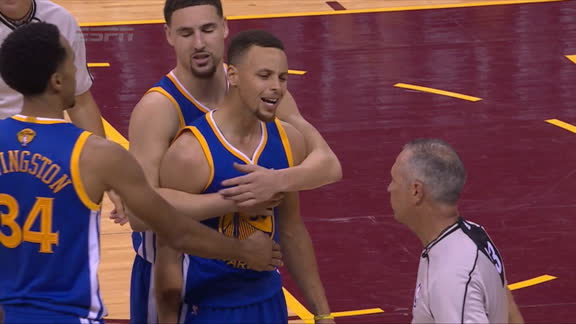 CLEVELAND -- Stephen Curry and Steve Kerr are likely to each face fines after protesting officiating in the Golden State Warriors' 115-101 Game 6 loss to the Cleveland Cavaliers on Thursday night.

Curry was automatically ejected for throwing his mouthpiece into the crowd with 4:22 left in the fourth quarter after being called for his disqualifying sixth foul. The mouthpiece hit the son of one of the Cavs' minority owners, who was sitting in the front row.

Curry is likely to face a fine, as is NBA precedent in these situations, and not a suspension, league sources told ESPN.

"I've thrown my mouthpiece before. I usually aim at the scorer's table. I was off aim. Definitely didn't mean to throw it at a fan," Curry said. "That was obviously not where I was trying to take my frustration out."

Curry was angry about several fouls that were called against him throughout the game, as was Kerr, who said he was happy that Curry expressed his feelings by throwing his mouthpiece.

"He had every right to be upset. He's the MVP of the league. He gets six fouls called on him; three of them were absolutely ridiculous," Kerr said. "He steals the ball from Kyrie [Irving] clean at one point. LeBron [James] flops on the last one. [Referee] Jason Phillips falls for that for a flop. As the MVP of the league, we're talking about these touch fouls in the NBA Finals.

"Let me be clear: We did not lose because of the officiating. They totally outplayed us, and Cleveland deserved to win. But those three of the six fouls were incredibly inappropriate calls for anybody, much less the MVP of the league."

Those type of comments, especially calling out an official by name, typically earn a fine.

Curry's wife, Ayesha, also showed her frustration on Twitter, writing: "I've lost all respect sorry this is absolutely rigged for money... Or ratings in not sure which. I won't be silent . Just saw it live sry."

Curry apologized to the fan hit by the mouthpiece -- Andrew Forbes, son of minority owner Nate Forbes -- and the two shook hands.

"It's all good," Andrew Forbes told ESPN's Tom Haberstroh. "It just hit me, and I was like, 'Who? What?' I was just cheering, being a fan. I don't even know where he was throwing it. ... He was good about it."

Curry said later he had hoped to visit with Forbes after speaking to the media but was told he already departed.

The Undefeated's Marc Spears contributed to this report.