KGO
By Laura Anthony
ANTIOCH, Calif. (KGO) -- Antioch police are Contra Costa fire investigators are looking for an arsonist and the perpetrator of a hate crime that left a family, including four children, unharmed but badly shaken.

"The manner in which this fire was set has definite deadly potential," Antioch Police Dept. Chief Allan Cantandos aid.

Officials say the fire was deliberately set and they are looking for an arsonist.

Police don't know exactly why this family was targeted but are hoping that home security video leads them to one or more suspects.
"We saw him light three bottles right there on the sidewalk, and then proceed to throw them at the house," homeowner Roshon Williams said.

Williams says it was a hate crime that was captured on her home surveillance system, one that defaced her house and forced her family to run for their lives.

"My 28-year-old daughter woke me up and said, 'Mom, the house is on fire,'" Williams said. "So I hurried up and ran and got the fire extinguishers. My son included, my daughter, we all got the water hoses and everything to put the fire out."

"I looked out my front window and saw all the commotion in the driveway with all the occupants trying to get out, all the kids the kids and then I saw the flame in the front yard," neighbor Suzie Huddleston said.

Once the family was out safely, they saw a swastika and racial slur scrawled across the front of the house and on a side door in blue paint.
"We're disgusted and appalled that somebody would do this to a family in our community and we are going to do our best to bring them to justice," Cantando said.

"Several of these devices were deployed against the front of the house, near the front door, near the second story bedrooms and at the garage door. And again had very serious potential. Fortunately the residents awoke quickly," Contra Costa Fire investigator Vic Massenkoff said.

No one was hurt and the home had only minor damage. Ass for the offensive graffiti, Williams' son painted it over Wednesday morning.

"My feelings are hurt to the fact that my neighborhood is a beautiful neighborhood and it looks like it does right now," she said. 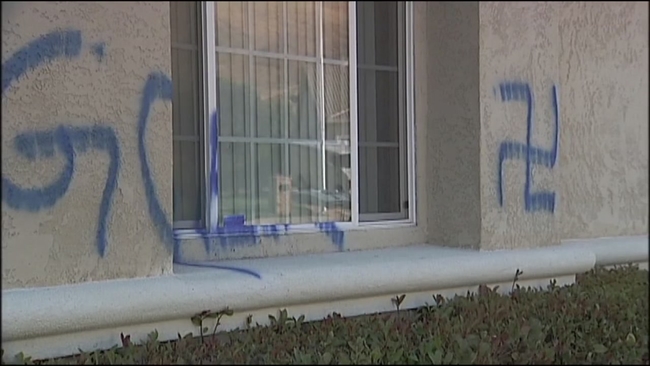