RELATED: Bride asks man with father's heart to walk her down aisle on wedding day

Another day, another prep session for yet another kidney transplant at CPMC.

Geary McKoy is the recipient, Dr. Nikole Neidlinger is one of the surgeons, and Janet Jennings is the donor.

On Friday, Janet will give her kidney to Geary through a connection that would never have happened if his wife, Jean, had not been giving Janet a facial as part of a Groupon promotion.

"It was not a kidney Groupon," said Geary.

No. More like two women talking about life and how Jean's not being able to donate to Geary, which inspired Janet to help.

"I was blown away," said Jean.

Janet added, "There are three other people doing the same thing I am doing."

Correct - on Friday she will be part of a donation chain transplanting kidneys to four different people.

"You have to come with a living donor to enter into a swap," said Neidlinger.

For Geary and the other patients, it means no more dialysis.

And for the donors, Janet said, "If you can help someone get a better quality of life and it's not harmful to me, why wouldn't you?"

It's a personal question made possible by modern medicine. And a procedure that that may lead to a really good party for eight people somewhere down the road.

Wayne: "You're gonna need a bus when this thing's over."
Jean: "Yes, a bus to Napa."
Janet: "That sounds good!"
Wayne: "Don't wreck you kidneys while you're there."
Related topics:
health & fitnesssan franciscoorgan donationstransplantmedicalhospitalsurgerydoctorsfeel good
Copyright © 2020 KGO-TV. All Rights Reserved.
ORGAN DONATIONS Football player who collapsed during game is brain dead 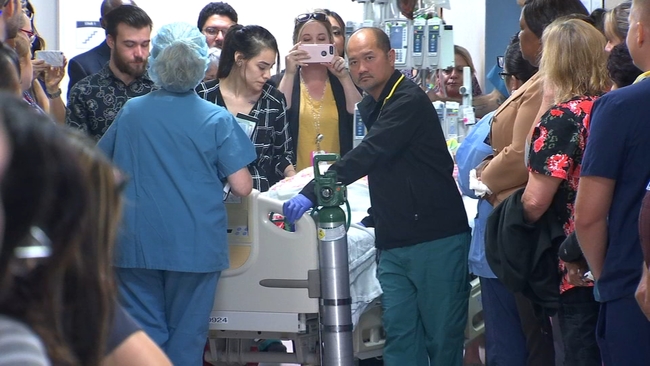