Only the ABC7 News I-Team has learned the fire likely sparked at the site of a marijuana farm and that the farm owner has ties to a medical marijuana dispensary in Santa Cruz.

Attorney Mark Garver read a statement from the owner of an alleged pot farm, where the Loma Fire may have begun: "We are devastated about this terrible tragedy. Our hearts and prayers go out to everyone affected."


And another issue today, neighbors said they've been complaining to public officials for more than a year about the fire danger posed by the increasing number of pot farms in those mountains.

The man listed as CEO of a Santa Cruz medical marijuana dispensary owns the 80-acre farm where the Loma Fire may have begun. He issued a statement through his attorney, only to the ABC7 I-Team.

Mark Graves read, "To our knowledge nothing illegal was going on on the property -- no butane, no firearms, no meth lab, no illegal marijuana grow."

Graves wouldn't say if the owner was running what he considered to be a legal marijuana farm. He says they all want answers about what sparked the blaze: "We are actively trying to find out, actively investigating, cooperating however we can."

New law enforcement and CAL Fire sources confirm what the I-Team reported Wednesday. Investigators are concentrating on that farm as the origin of the fire. Last month, neighbors identified the farm as a marijuana grow. And on Friday, more neighbors are speaking out.

They asked not to be identified because they're concerned about the danger from the many marijuana farms that have popped up over the past few years.

Neighbor 1: "The thing that bothers us is the semi-automatic guns, the AK-47's."
Dan Noyes: "You actually hear that?"
Neighbor 1: "Oh yeah, like crazy sometimes."

Law enforcement said they have had shoot-outs with pot farmers in these mountains, including Mexican drug cartels.

The neighbors showed a letters and emails that support that they've been complaining to public officials for more than a year about the pot farms -- the public safety and environmental issues, and the risk of wildfire.

Neighbor 1: "This is what we've been telling the county for a couple years now, this is what we were afraid of, this fire."
Neighbor 2: "They have been drawing water out of the creek, they take their chemicals, they build their structures, and they run PVC pipe up the hill."
Neighbor 3: "We've seen barely anything going on to eradicate this situation."

"We've responded to those emails and then forwarded them on to the Sheriff's Department that's responsible for enforcement of illegal grows," He said.

But the neighbors say Wasserman and other public officials could have --- should have -- done more. Of course, the question is what will happen if the cannabis law passes. There's a big concern conditions could get worse on the mountain, without enough oversight. 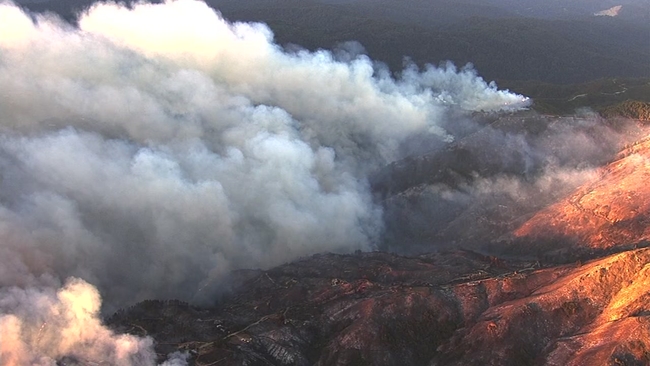