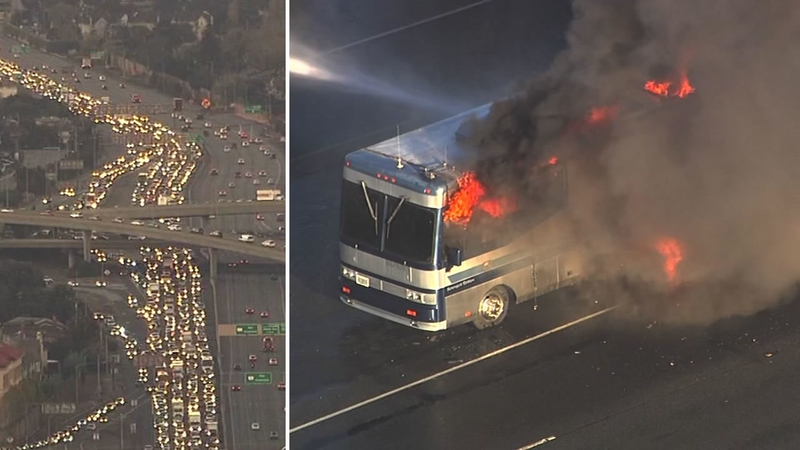 Fire crews blasted water on the vehicle from all sides for well over an hour trying to get the flames out.

Drivers on #Highway101 in #SanCarlos area got desperate, turning every which way to avoid #traffic from an RV fire: https://t.co/PlOVVMYl94 pic.twitter.com/8sqOFWSNcS

The fire came at the worst possible time for commuters, creating a huge back up right during the afternoon rush hour. People got out of their cars to watch the flames.

The RV was just a few feet before the Holly exit, but has since been towed away. This was a major shutdown. In fact, the last time the same portion of Highway 101 was closed in both direction was in 2007.

An ambulance was behind the motor home and noticed smoke coming from it. Medics got the couple to pull over. They got out just in time.

If you’re wondering why #traffic on #Highway101 in #SanCarlos is sluggish or stopped, it’s because of this RV fire. https://t.co/p3onl9eVMf pic.twitter.com/zuyqBIXFMN

"We were taking precautions in case something were to explode, we don't want to get anybody else caught in the middle," said CHP Officer Art Montiel.

The couple told firefighters, they had a 50-pound propane tank, as well as some small, five to 10 pound rockets inside.

They were heading home to Oregon from a cancelled model rocket show in Las Vegas. As a result, fire fighters were forced to attack the fire from a distance.

"When a propane tank was being impinged by fire it causes the tank to vent or relieve pressure. If that can't keep up the potential explosion from a propane tank can be quite large," said Redwood City Fire Chief Stan Maupin.

The potential for danger was so high officials shut down the entire freeway as a precaution. Drivers were left stuck in their cars for hours. Highway 101 was a parking lot. Some cars turned around. Drivers got out and waited on the median barrier. Motorcycles drove the wrong way out and city streets were gridlocked.

"It was really confusing, it was ugly, because people didn't know what to do, because it happened so fast, plus, it's rush hour," said Palo Alto resident Paul Unga.

"We were trying to leave work around 4:30 and now it's 7:30," said San Francisco resident Divya Chandran

The 101 shut down caused problems for emergency personnel too. Menlo Park fire had seven calls for help during this time. It took them 17 minutes, 10 minutes longer to respond. The cause of the fire is under investigation.

Before you head out to your car, be sure to check out the ABC7 traffic maps for real-time information to help you navigate through traffic jams.

All lanes of US-101 currently closed between Woodside Road and Holly due to a vehicle fire. Avoid the area! @SMCSheriff @redwoodcityfire pic.twitter.com/g3Scect7E8