Colin Kaepernick benched by 49ers after dismal 3 quarters vs. Bears 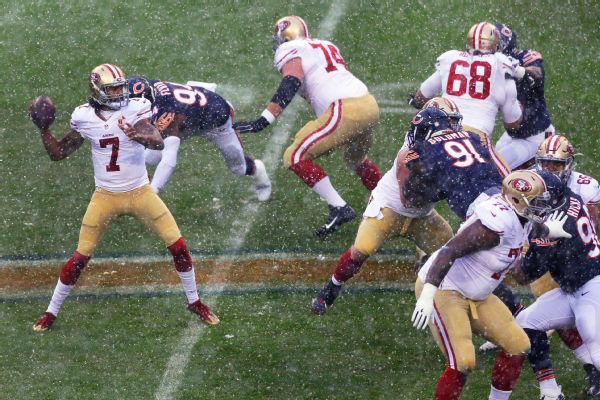 Kaepernick, who entered the game having thrown for more yards in the past four games than in any four-game stretch in his career, struggled mightily in the cold and snow of Soldier Field.

At the time the Niners pulled him for Gabbert, Kaepernick was 1-of-5 passing for 4 yards, with no touchdowns and no interceptions for a passer rating of 39.6. He was also sacked five times for 25 yards, leaving the Niners with negative-21 net passing yards and a 24-6 deficit at the time of his departure.

In the process, Kaepernick became the first quarterback in NFL history to be sacked five times and throw for fewer than 5 yards in a game, according to ESPN Stats & Information.

"I thought we needed a spark on offense, needed to get something going," Kelly said. "[I] knew we were going to be throwing every down, so give Blaine a shot. That was it, nothing more."

Kaepernick said he was "surprised" he got pulled but didn't feel it was his place to put up a fight when quarterbacks coach Ryan Day informed him of the change despite getting so few chances to throw.

"It wasn't something I was expecting," Kaepernick said. "I am always prepared and ready to do everything I can to help this team win."

The Niners spent last week practicing in the 85-degree temperatures of Orlando, leaving them to struggle in the cold and wet conditions of Soldier Field. Kaepernick, in particular, had trouble getting the ball out quickly and accurately.

"I think the weather was something that definitely played a factor," Kaepernick said. "We have to be able to do a better job managing that, handling it, being able to throw the ball still.

"More than anything, it's tougher throwing a wet football, but once again it's something that we have to be better at in being able to handle that."

On Gabbert's first attempt, he completed an 18-yard pass to wide receiver Jeremy Kerley. Gabbert finished 4-of-10 passing for 35 yards, with no touchdowns and no interceptions. He was sacked once for a safety. All told, the Niners finished with 6 net passing yards.

After the game, Kelly said there had been no discussions about who will start at quarterback next week against the New York Jets and no permanent decisions have been made.

"I was just watching how the ball was coming off of his hands and what our chances were of completing them," Kelly said. "Maybe I was too cautious, but we didn't look like we were doing much in the passing game."

Kaepernick said whether he starts moving forward is not up to him and whether he believes he should is inconsequential.

"That's not my decision," Kaepernick said. "My feelings on it really don't matter at this point. I'm just going to do everything I can to make sure I'm prepared."

Kaepernick's yardage output was, by far, the worst of his career in a game he started. His previous worst was a 67-yard outing againstArizonaon Sept. 27, 2015.

After losing a preseason competition to Gabbert for the starting job, Kaepernick took over before the team's Week 6 game against Buffalo. Sunday was Kaepernick's seventh start of the season and the only one of those games he did not finish.

Kaepernick had been steadily improving over the past month but acknowledged that Sunday's loss was a setback. Asked about an NFL Network report that he plans to opt out of his contract after the season, Kaepernick repeated the answer he has given when asked about it all season.

"Once again, like I've said all along, my focus is on the next game," Kaepernick said. "So my focus has been on the Bears this past week."

Kaepernick benched during dreadful performance
Colin Kaepernick completes just one pass and takes five sacks before being pulled in a 26-6 loss to the Bears.

Kaepernick 'surprised' by benching
49ers QB Colin Kaepernick tells reporters he didn't expect to be benched, while Chip Kelly says he was looking for a spark from Blaine Gabbert.