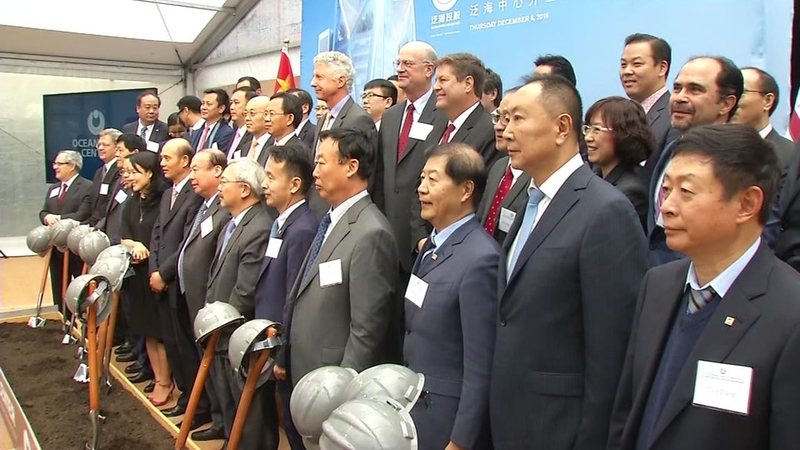 Officials break ground on the Oceanwide Center in San Francisco

SAN FRANCISCO (KGO) -- Officials broke ground today for what will be San Francisco's second tallest building, dwarfed only by the new Salesforce Tower. The Oceanwide Center is only one block away from the Millennium Tower, but it'll be spared the controversy.

The groundbreaking brought executives from China's giant conglomerate Oceanwide Holdings Group, the developers of the 910 foot tall mixed use tower and a smaller hotel and residential high-rise.

The project on First and Mission stands like a glass edifice on the Transbay Transit site development. Mayor Ed Lee negotiated with the developers for much more than just the center itself.

"The developers agreed to provide over $140 million worth of housing immediately within a mile of this project site," said San Francisco Mayor Ed Lee.

Plus, a third of all the units in the residential complex itself will be affordable housing. The Oceanwide Center is near Millennium Tower, the high-rise which has unexpectedly sunk 16 inches and tilted two inches.

Across town at city hall, a supervisors committee voted to ask the full board to subpoena a Berkeley engineer who reviewed the tower's design before it was deemed structurally safe.

"During the investigation that we have done to date, knowing what Mr. Moehle knew is key to this investigation," said Aaron Peskin, San Francisco supervisor.

The Millennium Tower's foundation piles are built into dense sand but not into bedrock. The new Oceanwide Center will go all the way into Bedrock.

"In fact I think this is going to be the deepest of all the bedrock to make sure its stable," said Mayor Lee.

The completion date of the two million square foot complex is 2021.


Click here for more stories on the Millennium Tower.