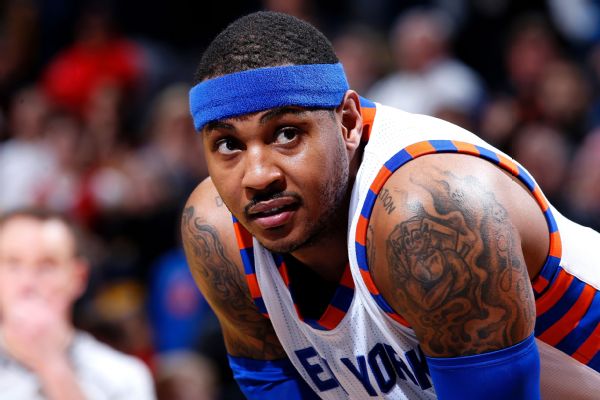 LOS ANGELES -- After months of optimism on both sides, Carmelo Anthony now says he's "skeptical" that the NBA Players Association and owners will be able reach a new collective bargaining agreement before Thursday's deadline.

According to ESPN.com's Marc Stein, sources on both sides of the negotiating table nonetheless expressed optimism Saturday night -- despite the late snag and Anthony's pessimistic forecast -- that a new labor deal remains within sight.

Sources told Stein that control over licensing matters and the use of player likenesses has emerged as a significant issue in the latter stages of the labor talks.

Clippers guard Chris Paul, president of the player's association, said he hadn't been aware of Anthony's comments but said, "I'm not doubting that happened."

"But we are working tirelessly when we're not in the game. We're trying to make sure we can reach an agreement and get a deal done," Paul said after the Clippers' 133-105 win over the Pelicans.

When asked if he was optimistic, Paul replied:"Very. You've got to be. Why not?"

That is a sentiment shared by another marquee player.

"We got to stay optimistic," LeBron James said after the Cavaliers' 116-105 win over the Charlotte Hornets. "But obviously, Melo is saying he has some concerns with it. We still got a few days, we still got a few days. Obviously, our game right now is the best it's ever been, from where it is right here domestically to all the way around the world, so hopefully both sides come to an agreement."

The NFL Players Association, for example, has control over licensing and the use of player likenesses. In the NBA, licensing control is maintained by the league in exchange for an annual flat fee in the millions, but the NBPA has been known to covet an arrangement more in line with the NFL's.

Thursday is the deadline for either side to opt out of the current collective bargaining agreement. The league and union would actually have until June 30, 2017, when the current CBA expires, to hash out a new deal in the event either side opts out.

But the sides, as Anthony noted, have been close to a deal for some time, with one source telling ESPN.com's Dave McMenamin that representatives for both parties have been meeting multiple times daily the past week.

Anthony declined to go into the specifics of the late snag in CBA talks, but he reiterated that "as players, we want to get a deal done."