Russell Westbrook: 'I just don't get ref'd the same' as other players 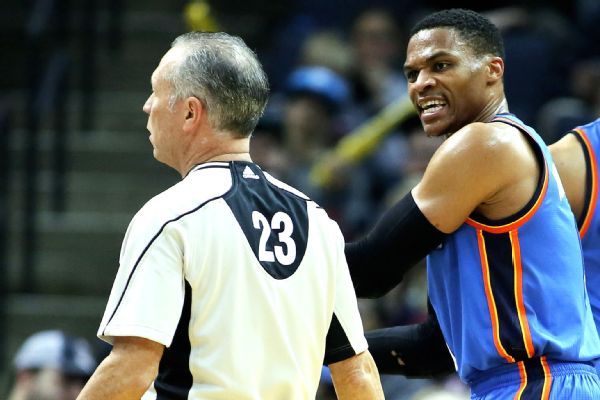 After picking up back-to-back technical fouls to earn an ejection midway through the third quarter of Thursday night's114-80 loss to the Memphis Grizzlies,Oklahoma City ThunderguardRussell Westbrook voiced frustration and said he was being officiated differently from other players.

"Honestly, I don't know, man. Honestly, it's crazy to be ejected like that, especially when I didn't do nothing," Westbrook said. "It's just crazy, man. Especially for me, because I feel like I don't get the benefit of the doubt most of the time, especially throughout the game with refs.

"I get so many techs just for talking. I can't even say nothing when I'm getting hammered every time I go to the damn basket throughout the games and previous games. Not tonight, but every night. I just don't get ref'd the same way as other people, and I don't appreciate it."

Westbrook finished with 21 points, 5 rebounds, no assists and 6 turnovers in just 23 minutes against the Grizzlies.

His ejection Thursday came after he argued what he thought was an air ball by the Grizzlies and an incorrect resetting of the shot clock. While JaMychal Green took free throws, Westbrook persisted with officials and appeared to repeat, "That's bulls---," over and over. Eventually, official Brian Forte hit Westbrook with a technical and then a subsequent technical seconds after.

After the game, referee Jason Phillips explained that officials "had no doubt" the ball hit the rim despite Westbrook's objections. Phillips said the play was no longer reviewable after a foul was called.

"We explained to him -- Brian Forte explained to him: 'We're good, we've got to let it go, we can't go review it anyway, but I hear what you're saying. We've got to move on,'" Phillips said. "He continues to complain about it, so then he is issued the first technical foul.

"After being issued the first technical foul, he continues to complain about the ball not hitting the rim and then even proceeds to use some profanity during the conversation also. So at that point, he's issued the second technical foul, which results in an automatic ejection."

"I'm not so sure he even warranted being thrown out," Donovan said. "I know he was -- and I was kinda the same way -- I didn't even know if the ball even hit the rim. Maybe it did, maybe it didn't."

Donovan has commented before about the way Westbrook is officiated. Following the Thunder's game against the Atlanta Hawks on Dec. 19, Donovan said Westbrook could go to the free throw line "20 times a game" because of his aggressive style of play.

"I don't know if there's a player that's quicker, faster, more explosive and plays in the lane more than he does," Donovan said. "And I do think that he's a guy, in my mind, that could go to the free throw line, seriously, 20 times a game. That would be very easy with the amount of contact he takes going to the rim, and he got there 13 times, I think, tonight, and that maybe seems like a lot. ... But I've always been a big believer that when he's going and he's getting hit, fouls should be called, in my opinion."

The NBA said the following day that officials missed two critical late calls in that game, both of which should have sent Westbrook to the line to give OKC a chance to win.

"I do think when you're getting hit as much as he's getting hit and you have to deal with that and not have fouls called, and you see other things with other guards and plays not being called that he would never even get because he's fast, quick and explosive -- I think after a while, that stuff builds up," Donovan said.

A year ago to the day, Westbrook said he was "done" getting technicals after "learning" the officials don't ever change their call.

"I'm done with those days," he said. "I learned in the summertime, once they make a call, they ain't changing it. Took me a while, but I learned it.

"I watched film. I watched all my techs and all the dumb s--- I was doing, so I decided to tell myself, there's no need to argue. They're not changing it, so move on."

Thursday's game marked just the third time in Westbrook's career that he finished a game with no assists. But he is still averaging a triple-double for the season with 31.3 points, 10.4 rebounds and 10.6 assists per game.

Westbrook 'doesn't appreciate' how he's treated by refs
Russell Westbrook lashes out at the refs after being ejected in the Thunder's loss to the Grizzlies and believes he doesn't get the benefit of the doubt enough.
Related topics:
sportsespnoklahoma city thunderrefsofficialsejectionrussell westbrooknbareferees
Copyright © 2021 ESPN Internet Ventures. All rights reserved.
More Videos
From CNN Newsource affiliates
TOP STORIES