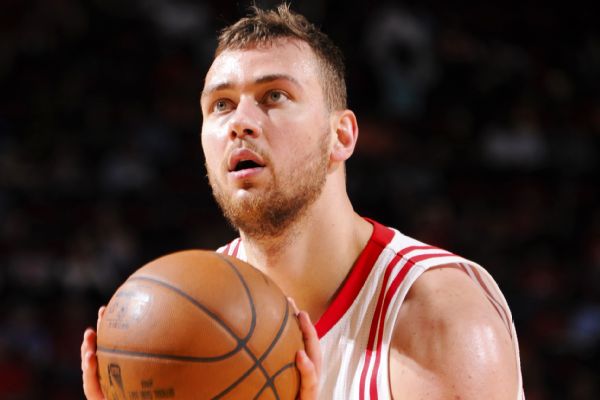 After five months in limbo, Donatas Motiejunas is officially back on an NBA roster.

The New Orleans Pelicans announced Tuesday that they had officially signed the free-agent big man.

Terms of the deal were not disclosed, but ESPN's Marc Stein reported Sunday that the agreement is for one year at a pro-rated share of the $1.1 million veterans minimum.

The Pelicans waived forward Reggie Williams on Sunday to clear a roster spot.

While still a restricted free agent, Motiejunas, 26, signed a four-year offer sheet with the Brooklyn Nets in late November that was potentially worth up to $35 million. After Houston matched the Nets' offer sheet, Motiejunas refused to report for his physical, which led to the sides reworking some of the contract terms in a new four-year deal.

TheHouston Rockets, though, ultimately decided to surrender their rights to Motiejunas and make him an unrestricted free agent after he finally took his physical, severing their ties to him after four seasons together following negotiations with his agent B.J. Armstrong and league officials.

The Rockets traded Motiejunas to the Detroit Pistons as part of a three-way deal last February, but the Pistons rescinded the trade after a physical revealed concerns about Motiejunas' back. Motiejunas ended up rejoining the Rockets and playing the rest of the 2015-16 season, recording a double-double (14 points and 13 rebounds) in Houston's only win over Golden State in the teams' first-round series in the spring.

The Lithuanian then struggled this past summer in restricted free agency to attract much outside interest until after the Rockets pulled their two-year offer starting in the $7 million to $8 million range on Nov. 22. Houston was only willing to guarantee the first season of its original two-year offer in a nod to Motiejunas' injury history. The 7-footer became an unrestricted free agent on Dec. 15.