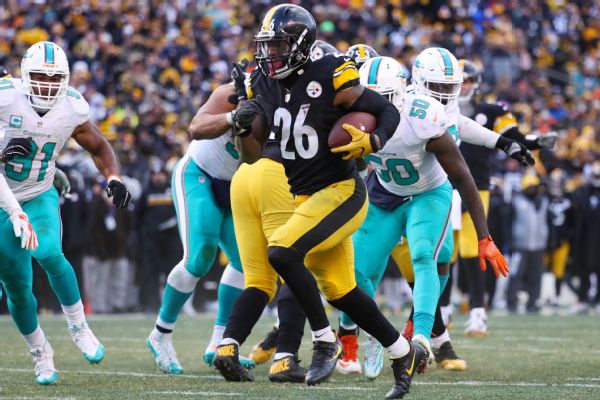 Bell torched the Miami Dolphins for 167 yards and two touchdowns on 29 carries, surpassing Steelers great Franco Harris, who rushed for 158 yards in Super Bowl IX in 1975.

Bell, the 11th player in Steelers playoff history with at least two rushing touchdowns in a game, also owns the franchise's single-game regular-season record, with 236 yards against the Buffalo Bills in Week 14.

Bell said he was told he broke the record late in the third quarter Sunday and "it kind of blew me away" -- especially in his playoff debut after back-to-back knee injuries ended his 2014 and 2015 seasons prematurely.

"It's really humbling. It's a great achievement," Bell said. "It just goes to show you how good this team has been."

The 24-year-old running back did damage on a variety of Miami's defensive looks. On his first 20 carries, Bell produced 12 rushes for 96 yards against 7 or few defenders in the box -- and 7 rushes for 52 yards against 8-plus defenders.

Bell averaged 157 yards per game during the regular season, the third-highest clip in NFL history for a running back.

"It is fun to sit and watch and just see what he is going to do because he is incredibly talented," Steelers quarterback Ben Roethlisberger said of Bell.

According to Bell, his running style is so patient that even running backs coach James Saxon urges him to hit the holes harder.

But Bell said he wants to control the pace with his running, setting up linebackers and safeties with his eyes and stutter-steps.

Sunday marked Bell's fourth game with at least 28 carries in his past seven games, all wins.

"I don't feel fatigued," Bell said. "The offensive line wants to run the ball so we went down there and ran the ball in the end zone."