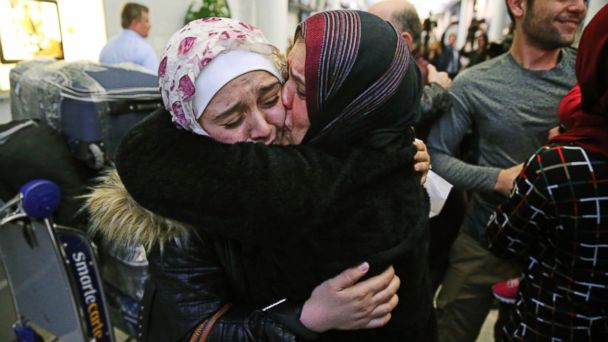 The new order, to go into effect next week, replaces the controversial order signed in late January and which a federal court blocked last month. It narrows the list of countries from seven to six by removing Iraq, placing a 90-day ban on new visa applications from the remaning six: Iran, Libya, Yemen, Syria, Somalia and Sudan. It also halts for 120 days any entry by refugees to the U.S. And, unlike the first order, the new ban explicitly exempts permanent legal residents and also doesn't apply to people who already hold valid visas.

Here are some notable responses to the order signed Monday:

"Trump's obsession with religious discrimination is disgusting, un-American, and outright dangerous. Don't be fooled - he promised again and again during his campaign that he would single out and persecute a specific religious group, and that's exactly what he's trying to do now. This second Muslim ban is just as unconstitutional as the last one and it isn't making us any safer."

"A watered down ban is still a ban. Despite the administration's changes, this dangerous executive order makes us less safe, not more, it is meanspirited, and un-American. It must be repealed. Delaying its announcement so the president could bask in the aftermath of his joint address is all the proof Americans need to know that this has absolutely nothing to do with national security. Despite their best efforts, I fully expect this executive order to have the same uphill climb in the courts that the previous version had."

"The president's conduct over the weekend emphasizes how little regard he has for reality. As the leaked reports from Homeland Security exposed, the White House has desperately sought to invent an after-the-fact justification for its baldly prejudiced and unconstitutional Muslim and refugee ban. Protecting the American people requires us to be strong and smart, not reckless and rash."

"This revised executive order advances our shared goal of protecting the homeland. I commend the administration and Secretary Kelly in particular for their hard work on this measure to improve our vetting standards. We will continue to work with President Trump to keep our country safe."

"I have always shared President Trump's desire to protect our homeland. This executive order will achieve the goal of protecting our homeland and will, in my view, pass legal muster. I congratulate the administration for modifying the original order to ensure that it is prospective in application, protective of those with valid visas and legal status, and exempts Iraqis, as five thousand Americans are currently fighting alongside them against ISIL. I believe the new order will withstand legal challenges as it's drafted in a fashion as to not be a religious ban, but a ban on individuals coming from compromised governments and failed states. This executive order will help achieve President Trump's goal of making us safer."

"Today's executive order uses existing authorities to strengthen our national security, and also is carefully tailored to exclude lawful permanent residents and current visa holders. By clearly stating this order applies only to prospective visa holders, the President has addressed the crux of the Ninth Circuit's concerns and should ensure the unintended consequences from the last order do not reoccur. The departments of State, Justice and Homeland Security should continue working together to ensure the order's smooth implementation, to protect the rights and safety of the American people and our nation, and to identify individuals who are worthy of a case-by-case exemption."

"As I've said before, I think the idea that we should take a harder look at people coming into our country from war-torn nations with known terrorist networks is simply common sense. This is just a short pause in accepting immigrants from these countries to strengthen our national security. With this new executive order in place, I'm confident this policy will help keep America safe."

Washington state (which successfully sued to block the initial ban)

"By rescinding his earlier executive order, President Trump makes one thing perfectly clear: His original travel ban was indefensible - legally, constitutionally and morally. The president has capitulated on numerous key provisions blocked by our lawsuit, including bans on green card holders, visa holders and dual citizens, an indefinite ban on Syrian refugees, and explicit preferences based on religion. We are carefully reviewing the new executive order to determine its impacts on Washington state and our next legal steps."

"The Iraqi foreign ministry expresses its deep relief regarding the executive order signed by the American President, Donald Trump, which excludes Iraqis from the travel ban to the United States of America. We consider it an important step in the right direction that reinforces the strategic alliance between Baghdad and Washington on a number of levels, foremost the fight against terrorism."

"These measures will make nobody safer. Instead they could play directly into the hands of violent extremists claiming that the US government is at war with Islam. The publicity circus surrounding President Trump's every move must not distract from the fact that longstanding human rights commitments in the U.S. are being badly eroded. The new executive order is wrongheaded and counterproductive, and must be resisted at every step."

"This latest discriminatory iteration of Trump's Muslim ban will have tragic consequences for thousands of people seeking safety in the U.S. The intent of Trump's executive order targeting refugees and Muslims remains the same -- he has simply changed the wrapping paper. Tragically, LGBTQ people in the Middle East and North Africa are regularly threatened with violence and death for merely living their lives. Barring them from reaching asylum in the U.S. puts their lives in jeopardy. HRC will continue to fight for all LGBTQ Muslims and immigrants -- and we will stand alongside them against this discriminatory order."
Related topics:
abc newsnational
Copyright © 2021 ABC News Internet Ventures.
More Videos
From CNN Newsource affiliates
TOP STORIES