KGO
SAN FRANCISCO (KGO) -- The Bay Bridge and pedestrian path is now open seven days a week, so now people can get a great view from the new Vista Point on Yerbuena Island.

Schaaf and Russo, who were joined by bicycle and pedestrian advocates, left from the Bridge Yard building at 210 Burma Road in Oakland around 9:45 a.m. "To kick off national bike month in Oakland, we are celebrating the completion of the bike, pedestrian path to Yerba Buena Island," Schaff said.

"This project is going to allow people to bike across the Bay Bridge and they'll have a place to rest and go to the bathroom, which is incredibly important," Kim said.

Kim hopes the new path will bring bicyclists another kind of relief. "Relieving themselves of really what has become a terrible commute on the Bay Bridge," she said.

However, before this path could really change the commute as we know it, something else has to happen -- the trail has to go all the way to San Francisco. But the East Bay Bike Coalition said it could be a 10-year struggle, costing $350 million to attach a bike path to the western span of the bridge.

The 15.5-foot-wide path on the Bay Bridge connecting Oakland to Yerba Buena Island was completed and opened in October, but only on weekends.

Two-thirds of the path opened to the public in September 2013 when the new eastern span of the bridge opened to vehicle traffic.

The Bay Bridge carries nearly a quarter of a million car trips a day, and now, the new eastern span is seeing a growing number of bike trips, especially after this news.

Click here to take a look at the Bay Bridge trail map. 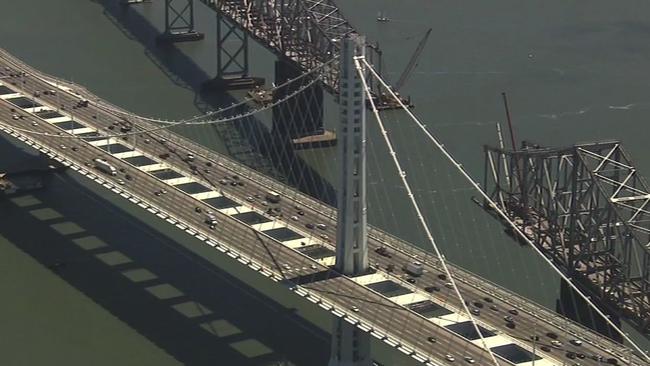 Brentwood man who hung Biden dummy says he's not racist
AstraZeneca says its vaccine is cheaper, but just as effective