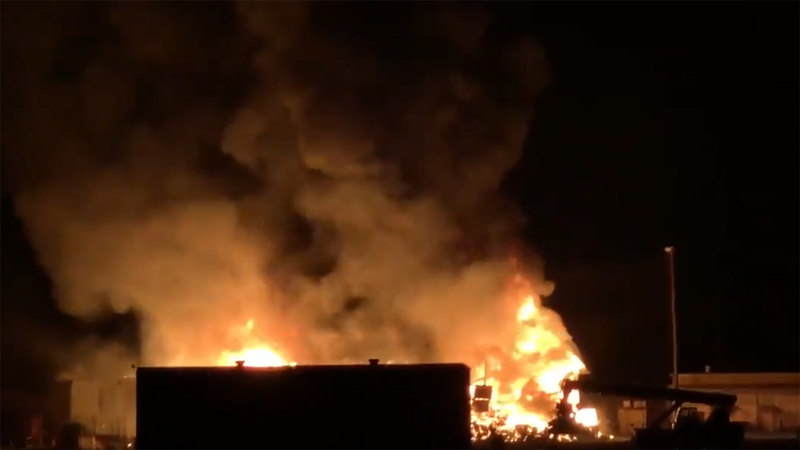 PLEASANTON, Calif. (KGO) -- A huge 2-alarm fire burned in Pleasanton at a fencing company off Busch Road near Valley Avenue.

Firefighters were called just before 3:30 a.m. They found a fire at a large metal building used by a fencing company with mixed materials inside, including vehicles. Firefighters determined it was too dangerous to go inside and fought it defensively.

This is in a commercial area. There was no shelter-in-place because of the smoke. Other businesses are also in this area, including a transfer station for the Pleasanton Garbage Service, but firefighters say they are not threatened. No injuries have been reported.

Firefighters say there are homeless encampments in this area but don't believe anyone was inside the building when they arrived on the scene.

They're investigating the cause. Firefighters expect to be on the scene all day.

2-alarm fire burning in Pleasanton on Busch Road at a building for a fencing company. Huge smoke plume in the sky... pic.twitter.com/oQdH18f3m7

Huge plume of smoke coming off a 2 alarm fire at metal building for a fencing company in Pleasanton on Busch Road Mixed materials burning. Firefighters are fighting it defensively. pic.twitter.com/j9JrG8JaDE