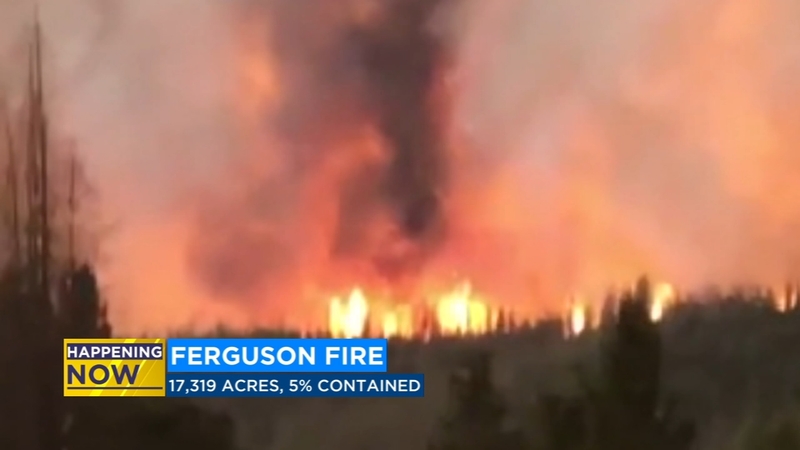 MARIPOSA COUNTY -- The battle to control the growing Ferguson Fire in Mariposa County rages on. Crews are currently monitoring and mopping up in the areas around Cedar Lodge, Indian Flat, and Cold Canyon.

However, the fire spread nearly 4,000 acres overnight making it a dangerous situation for officials. The latest report says the Ferguson Fire has burned 17,319 acres and is still only five-percent contained.

Currently, more than 100 structures are being threatened and mandatory evacuations are still in place. That includes Incline Road, from Foresta Bridge to the last BLM campground.

More than 1,800 firefighters are currently working 16 hours shifts to fight the flames. Firefighters spent Tuesday night building fire breaks around the most vulnerable communities. At a meeting for residents they explained how the winds, temperatures, and dry fuels are working against them.

A wildfire burning near Yosemite National Park has now charred more than 9,266 acres in the Mariposa County foothills and as of Monday night is only 2% contained.

Alex Olow spokesperson for the U.S. Forest Service said, "From down here looking up, it doesn't look like it's a challenge. But the fire is a little bit up north where we are. So we can't tell in the fire area itself. So there are several ridges that keep us from seeing the activities."

Officials said the fire appears to be moving northeast toward Yosemite National Park with the Highway 140 entrance to the park closed above Mariposa.

The Ferguson Fire is the largest fire burning in California. A federal response team is expected to arrive and gradually take over command the next few days.

Those impacted by this fire will have another chance this afternoon to get an update. A community meeting will be held in El Portal at the Community Hall Wednesday afternoon at 4:00 p.m.