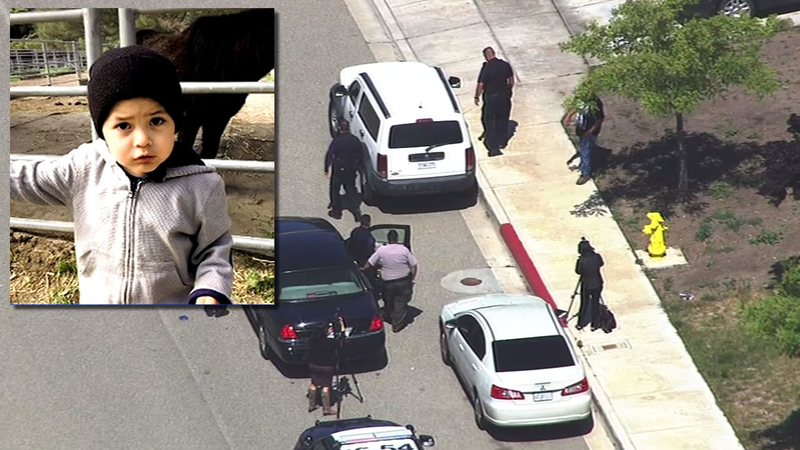 The father's car was stolen from outside the family home in Soledad. Jacob was found in a barn on River Road near Gonzalez, hours later.

Police say they hope to be able to interview the little boy sometime Thursday night. He is currently at a Salinas hospital where, as a precaution, he is being examined by medical staff.

Sky 7HD was over the scene Thursday afternoon where Jacob was found alive by sheriff's deputies just before 2 p.m. in unincorporated Monterey County on River Road, not too far from Gonzalez. A black Honda Accord that was at the center of today's Amber Alert, which was sent out at around 9:30 Thursday morning. Deputies had to bust the window open to pull Jacob to safety.

Police said it was a car-jacking in the family's drive-way that led to Jacob being kidnapped. The father had apparently left the car running with his son inside, as he ran to the front door to lock it.

Soledad police said a passer-by reported seeing a vehicle that matched the description sent out by law enforcement, which led them to Jacob.

The boy's father says that he is grateful that they were able to find his son.

"I had to stay strong and hope for the best, and I just want to thank everybody, and all of my friends that were out there, looking for my son," said Jesus Vargas, Jacb's father.

Deputies will be at the scene gathering evidence throughout the evening hoping to figure out who was responsible for the kidnapping.

Sills said they're also surveying the neighborhood where the kidnapping took place. They're hoping to find any surveillance video that could help with the investigation.

#NOW: Jacob's mom, who spoke with me earlier, is being briefed by detectives inside #Soledad PD. Chief told me: "the Amber Alert worked!"

Family members tell us the boy was found safely in the car in the town of Gonzales. They expect to see him soon. pic.twitter.com/mHMGDbaF9E

#ALSO: The stolen car, according to family, was found inside a some sort of shack along River Rd in Gonzalez, not too far from Soledad.