ABC7 Stars: Swimmer determined to help others after injury left him paralyzed

KGO
SONOMA, Calif. (KGO) -- ABC7 is recognizing a swimmer who is determined to help others after a spinal cord injury left him paralyzed.

There are those days that will change your life forever. For Theo St. Francis, it was a Saturday, a sunny afternoon in Boston Harbor. It unfolded quickly on August 24th, almost four years ago.

"I dove forward and I hit something," said Theo. "As soon as I came to, I realized something was wrong. I'm looking down at the sandy bottom and all I can see is my arms kind of floating limply in front of me. And I start trying to turn over to get a breath, and nothing in my body is responding."

Up to that point, that summer had been a dream. The star swimmer from Sonoma was college-bound. It was the week before orientation at MIT, where he was ready to study engineering and swim with the team. Theo may never know what he hit that day that broke his neck.

This photo of Theo in the pool was taken when he was a star swimmer before the accident.

Theo shows off his MIT shirt after he was accepted to college.

"I didn't know what paralysis was, I didn't know what spinal cord injury was. It was just a very primal instinct, I need air. And I think that if I were not a swimmer, and I hadn't been so comfortable and knew how to breathe out of the side of my mouth, I wouldn't have been able to get air," said Theo.

Floating face down, he turned his head to the side just enough to take small sips of air. The waves slowly brought him to shore, where a lifeguard found him in the sand. Theo told him to immediately call 911.

"And as they lifted me, all I could think was, I couldn't feel a thing of that," said Theo.

His parents, Susan Peterson and Ray St. Francis, were in Boston with a car full of dorm room supplies for Theo. His father got the call, saying there'd been an accident and Theo was headed to the emergency room. Still, they were not prepared for the extent of his injuries.

Theo lies in his hospital bed following the accident that left him paralyzed.

"When we walked into his room, we understood instantly that it was incredible severe," said Theo's mother, Susan. "He had a big white blanket over him... nothing was moving. And he said, 'Mom, come kiss me.' He'd never done that... and I knew, this was serious."

"I knew that that mother's love was the one thing I needed at that time," said Theo. "I needed to know that I was still here and I was still was a part of something, part of a family."

His C6 vertebra was shattered. In the hospital, his body still woke him up every morning at 6 a.m. for swim practice, except now, he couldn't move. 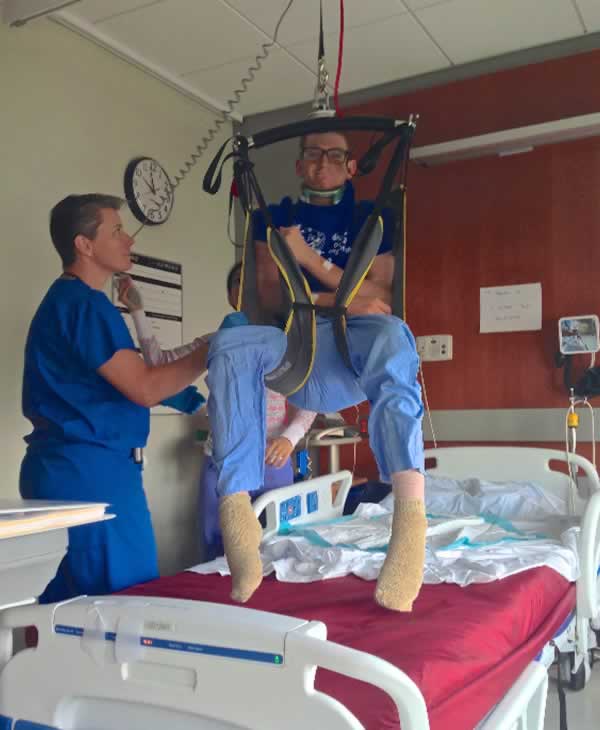 Theo gets lifted out of bed in the hospital.

"I've likened it to having your whole lower body encased in concrete," said Theo. "All of a sudden you feel like, because your body is disconnected, you're no longer a part of your own experience. Your world, your understanding, your whole sphere of consciousness is reduced to participating in the thoughts in your head. That's a real shrinking of environment that can be claustrophobic, it can be suffocating. When your world shrinks in, so do your thoughts and your images for the future."

His parents' trip, expected to last five days, turned into five months. His mother slept on a recliner in his hospital room with one eye open, always worried, always watching.

"No one could say that everything was going to be OK," said Susan. "I positioned the chair so that I could just open my eyes all night long and if ever there was a beep, I could hear it and immediately take action."

Day after day went by with Theo seeing the same view of the ceiling. College orientation passed, then the start of classes at MIT. But instead of despair, Theo chose determination.

"I just remember looking up and thinking, this can't be permanent, there has to be a way to resolve this," said Theo.

What followed the accident was years of forcing himself to do what felt impossible every single day -- grueling physical therapy, in and out of the water, acupuncture, cross-fit, Pilates and yoga, refusing to fall into a pit of depression or waste a moment on self-pity.

He calls himself a "recovery athlete." Every day brought a new test, and every day Theo met it with sheer force of will. The same discipline that he applied to swimming was now applied to a different goal, with smaller milestones that amounted to large personal triumphs. 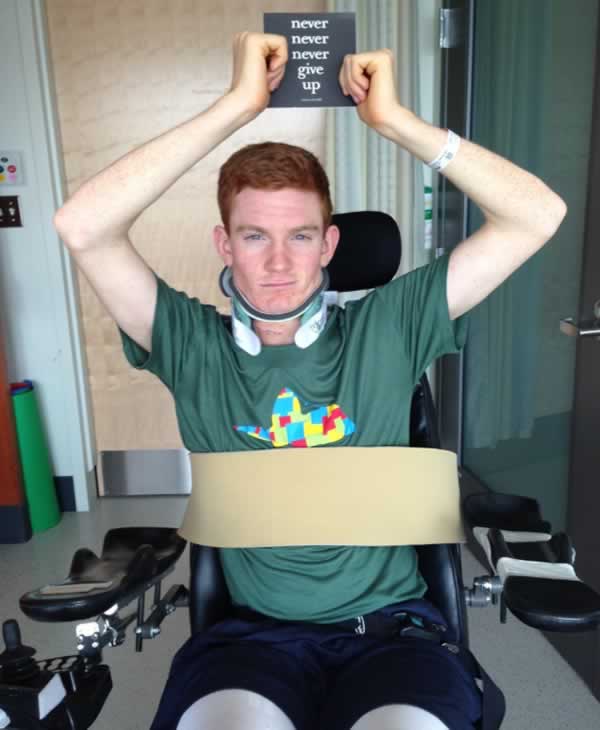 Theo does Pilates during his recovery. 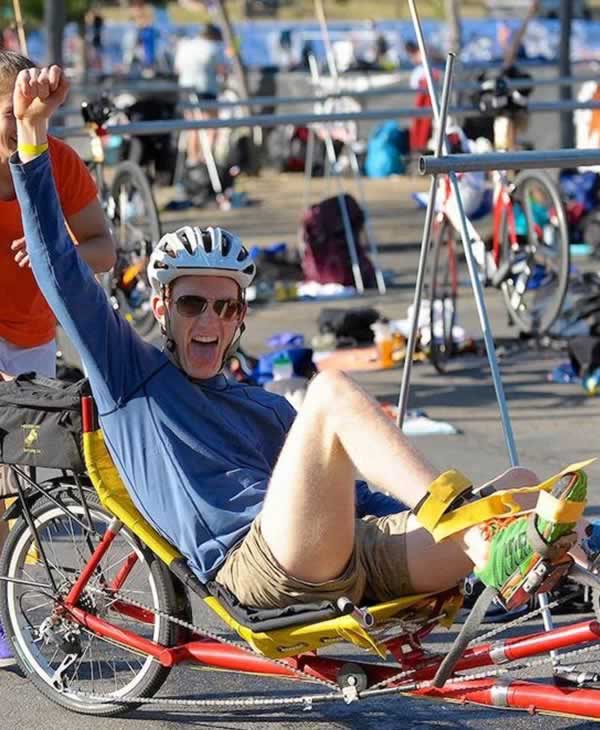 Theo cycles during his recovery.

"It's about not allowing the seeming impossibility, the uncertainty of how it might be done, get in my way," said Theo.

Against the odds, he has regained sensation in his entire body. His head, neck, shoulders and arms are all mobile. He is incredibly active and says in many ways, he feels more connected to his body now than ever before.

Now, it's time for a new chapter. Theo wants to give back. He and his trainer are founding a project called Zebrafish, which will provide help and online tutorials to others with spinal cord injuries -- free exercises to do at home to aid in their recovery.

He wants to share with others what he told himself in the hospital room years ago: "You have an opportunity to connect to your body in a way that you never have in the past, seize this opportunity."

For this family, in all of this, there's been an unexpected blessing. Theo's father says it's been a true privilege to help raise his son for a second time.

"This challenge has reaffirmed the closeness of a parent to a child," said Ray. "You always have such high hopes for your child, that they will do many more things than you might have. Now he's developed a response to this setback that instills in us the pride and the love of a parent once again."

Theo's mother has been deeply touched by the outpouring of support from the community, from MIT, from his swimming teammates in the North Bay, his high school, Marin Academy. Even from near-strangers.

"People we barely knew would send us random gifts," said Susan. "It was such a comfort for people to let us know we were part of their lives and they wanted to help in whatever way they could. Never have I understood the importance of community and connection, but family and friends has taken on a whole new meaning for us."

Theo says the future is unbelievably bright -- and yes, there is still something about the water. As often as he can, with a specially equipped car, he drives himself to the North Bay. He'll hitch a ride on the back of an old swim buddy until he reaches the edge and can splash in on his own. Watching him is a revelation. He floats on his back gracefully and cuts his way through the water. For him, it's still home.

Theo plans to go back to MIT in the fall of 2018, to pursue his degree in engineering. He wants you to know, the accident, this part of his story, is just a single lap in a much larger race.

"It's exactly how I feel about life, it's an open water swim just waiting to be tackled," said Theo.

To support Theo in his journey, visit his blog by clicking here.

Prosecutors: Capitol mob aimed to 'assassinate' elected officials
Some Bay Area seniors get vaccine, others wait with no answers