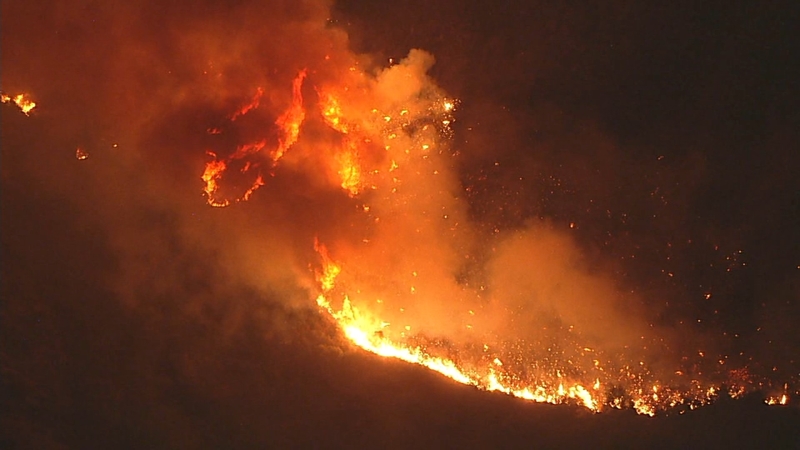 The so-called El Dorado Fire erupted before 10:30 a.m. in the 37000 block of Oak Glen Road, according to San Bernardino National Forest officials. By 6 p.m., the blaze was 5% contained.

Just over an hour later, Cal Fire issued an evacuation order for the community of Oak Glen. The evacuation area included Oak Glen Road through to Wildwood Canyon Rd. Shortly before 1:30, evacuation orders were expanded to include Mountain Home Village, Forest Falls and the eastern portion of Yucaipa.

Additional evacuation orders were later issued for Yucaipa residents east of Jefferson Street from Oak Glen Road to Yucaipa Ridge. The Red Cross set up an evacuation center at the Yucapia Community Center.

Helicopters and fixed-wing aircraft were seen dropping water and Phos-Chek on the flames. Firefighters from multiple agencies were toiling amid a heat wave that brought triple-digit temperatures to the area.

"These areas are known for wind-shifts, which changes the fire dynamic," said CALFire Capt. Thomas Shoots. "(It) can push the fire back on you when otherwise you'd be totally okay. A lot of interesting dynamics here. You top that off with the extreme terrain that we're dealing with here ... it's pretty extreme."

No injuries or structural damage were immediately reported.
A massive column of smoke that rose above the flames was visible for miles, and many residents of distant cities posted photos and videos of it on social media.

The cause of the fire is unknown.


App users: For a better experience, click here to view the full map in a new window
RELATED STORIES & VIDEOS: