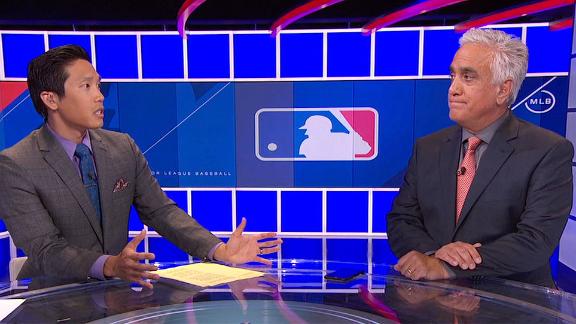 Third basemanPablo Sandovalhas struck a minor league deal to return to theSan Francisco Giants,pending a physical, according to multiple reports.

The former Giants star is en route to San Francisco after his release from theBoston Red Soxearlier Wednesday. Sandoval, who will turn 31 in August, will take a physical for the Giants then begin playing in Triple-A Sacramento, the reports said.

Because Sandoval is on waivers, he won't be able to sign a contract until later in the week, when he officially becomes a free agent.

"I'm waiting for Friday to make a decision, and the Giants are one of my options," Sandoval told ESPN's Marly Rivera by phone. "I have a few teams interested, but I can't make a decision until Friday."

The 2012 World Series MVP with the Giants was let go Wednesday by the Red Sox when he didn't report after being designated for assignment last week. It officially ended the Boston tenure for the once-celebrated free agent, who never was healthy enough to live up to the expectations that came with the $95 million contract he signed in 2014.

"He did a lot here, and we'll never forget that," Giants manager Bruce Bochy told KNBR 680 radio on Wednesday. "Sometimes, it makes sense, especially when you're looking at it financially, it doesn't cost you a lot."

"He was a big part of our World Series runs, so I think he's always going to have a place here in San Francisco and everybody's going to love that he's back," Belt said while walking into the ballpark Thursday. "I haven't seen him in a while, so I don't know. I think he was definitely a fan favorite, so I don't think there's going to be any problem with that."

With the Red Sox unable to find a team willing to take on part of his salary, Sandoval moved on after 161 games, 575 at-bats, 136 hits and 14 homers for Boston -- but not a single one of them in the postseason.

"I loved the way he played," Bochy said. "He had so much enthusiasm, and that got infectious in that dugout. And of course, what he did for us on the field ... a young guy that needed some help, so we all tried to do our part to make him a better player.

"He was a great guy to have on the club. A hard worker, a quick learner."