Donald Penn gets 2-year extension: 'Now I can focus on football' 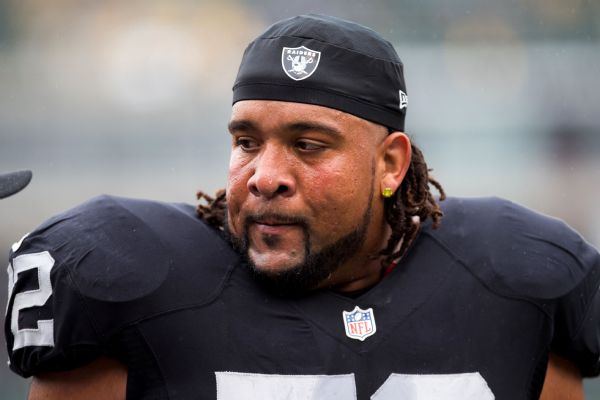 The Oakland Raiders have signed two-time Pro Bowl offensive tackle Donald Penn to a two-year extension through the 2019 season, the team announced Friday.

The deal is worth $21 million.

Penn, 34, held out of training camp and two preseason games before reporting to the Raiders with the promise of a sit-down to discuss a new contract. He had been in the final year of a two-year, $11.9 million deal and was scheduled to make $5.8 million this season.

The Raiders, who also re-upped quarterback Derek Carr and right guard Gabe Jackson this offseason, face the New York Jets at the Oakland Coliseum on Sunday in their home opener.

"Now I can focus on football. I can just enjoy my teammates, enjoy the process," Penn said Friday in the Raiders' locker room. "Because there was doubt. I didn't want to hit free agency again.

"I'm very blessed and honored that Mr. [Mark] Davis and the organization has that love for me, and I'm going to be able to live out my childhood dream and retire a Raider. ... It's just a relief now, and let's get on these Jets."

Penn sat down with Raiders general manager Reggie McKenzie after last week's season-opening win at the Tennessee Titans. In that game, Penn played all 66 snaps at left tackle and allowed just one hurry in 35 pass-block snaps, according to Pro Football Focus.

Last season, he gave up 28 total pressures in 621 pass-block attempts. According to PFF, Penn was the only tackle in the NFL to play more than 500 pass-block snaps and surrender only one sack.

Penn said he did not want to hold out, but he wanted to be paid accordingly.

"When you do something and you feel like you do something very, very well and you look at other people ... and they're not doing as well as you and they're getting compensated a lot more, better than you, that was more what it was," he said. "I'm not trying to be selfish, but when is it going to be my turn?"

With no movement, and still playing under his old deal, Penn returned to the Raiders.

"A Super Bowl championship is priceless," Penn said. "I swallowed pride and said, 'Hey, we've got a bigger mission here.'

"Our O-line, we know we're going to be set for a while. D.C. knows he's going to have that protection for a while," he said, referring to Carr.

Penn also pointed to other members of the Raiders' offense, such as Michael Crabtree, Amari Cooper and Marshawn Lynch, and said, "We have fun together."

"Coming to work on those Wednesday practices, when it's a long practice, you're dreading it, but then you get around your guys, it's all jokes and laughs and makes it go a lot smoother, makes it go a lot a lot faster," Penn said. "These guys around me, my teammates, I've got to give them a lot of credit, too. ... We've got a good group of people."

"Donald has over a decade of experience starting," coach Jack Del Rio said this week. "He's been in our system. This is his third year now in our system, so it's a lot different than a guy coming in as a rookie and missing so much camp."