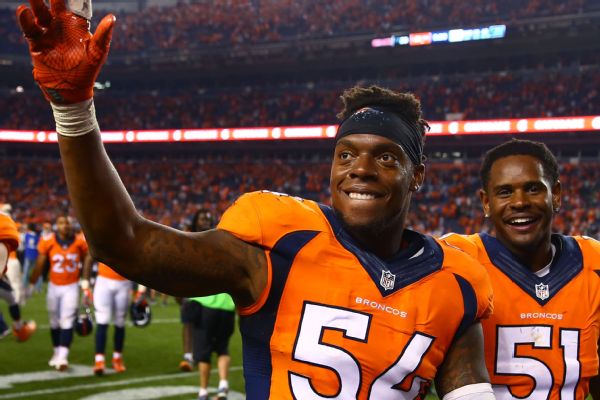 ENGLEWOOD, Colo. -- Denver Broncos linebacker Brandon Marshall says he appreciates NFL teams supporting the rights of their players to protest during the national anthem. He also suggests they show it by giving Colin Kaepernick a job .

"The dude, he's in shape, he's yoked, actually," said Marshall, who saw his ex-college teammate on a TMZ video recently. "He's so strong. He's ready to go. He told me he's been working out when I last talked to him. He said he's just waiting for a call. That's the next step."

Marshall is among many players who believe Kaepernick is being blackballed by NFL teams over the movement he started last year when he declined to stand for the "Star Spangled Banner" during the 2016 preseason to bring attention to racial inequality in America.

Kaepernick remains unsigned six months after opting out of his contract with the San Francisco 49ers and becoming a free agent.

"There's a lot of (poor) quarterback play around the league," Marshall said. "I'm not saying the Bears should sign him, but you know the player Mike Glennon is. You can't tell me he's better than Colin Kaepernick, and he's a starter right now."

Marshall, who attended the University of Nevada with Kaepernick, was one of the first NFL players to join Kaepernick in the national anthem protests last season. At times, Marshall was joined by a teammate or two, but for the most part he spent half the season as the sole protester on the Denver sideline.

He lost endorsements and fans over the protests. but also received kudos from general manager John Elway -- who's no fan of the kneel-downs -- for backing up his actions with charity and community work.

Marshall didn't plan on kneeling this season, but he began reconsidering following the president's response to the racially charged conflicts in Charlottesville, Virginia.

He stood apart from his teammates during the first two weeks of the season but didn't take a knee until Sunday.

Marshall was among 200-plus players across the league who knelt, sat, stretched or prayer during the "Star Spangled Banner" in response to the president's call for team owners to fire players who disrespect flag and country by refusing to stand for the national anthem.

He was one of 32 Broncos who took a knee in Buffalo.

"Last year I did it all by myself for eight games, but it's a lot different to have your brothers backing you," Marshall said. "I think whenever we decide to come together and do something, there's strength in numbers, they say, right? So, I definitely think that makes us stronger."

Yet, coach Vance Joseph is concerned this divisive issue in society could also bisect his locker room. So he's planning to address the issue with his players this week as they prepare for a game against the Oakland Raiders to "figure out what's best for our football team to keep us together."

The Dallas Cowboys took a knee together before the national anthem Monday night in Arizona and then stood arm-in-arm during the "Star Spangled Banner." But Marshall said that's no blueprint for the Broncos.

Not everyone will stand, either, Marshall suggested.

"In my opinion that means nothing if we all stand and lock arms," Marshall said. "I mean, I understand that's showing unity. But I just don't see the point in it."