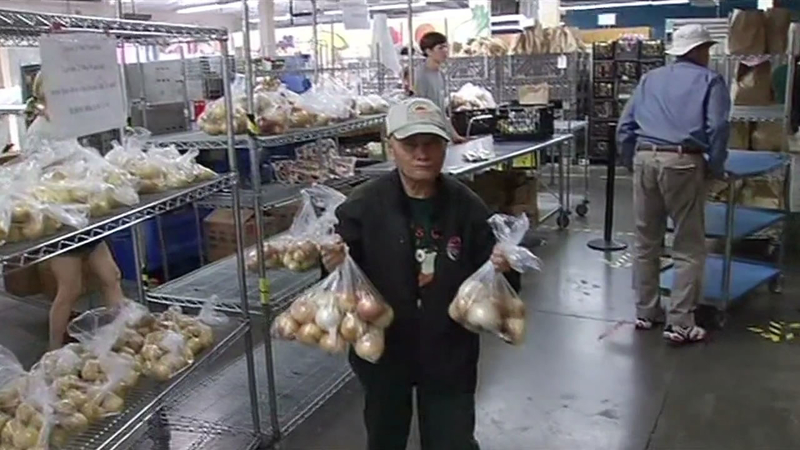 MILPITAS, Calif. (KGO) -- Buy food, or pay the PG&E bill? That's a choice some families in Silicon Valley are facing when they turn to food banks to make ends meet. And according to a new survey of the Valley's food banks, it's even impacting households where someone is working.

Roughly 250,000 people each month show up at South Bay food banks to feed their families.

Arletta Jorgenson goes to the food pantry in Milpitas monthly to make sure her two daughters, ages 12 and 8, get proper nutrition. While her husband works, his pay doesn't cover food, rent and other needs.

"There's time when I'll skip breakfast and wait to eat something for lunch and then just have dinner, maybe a snack in between, just to make sure the food stretches out for my kids, Jorgenson said. "He makes like $12.50 an hour, but even then, that averages out not even full-time. There are times at the restaurant he has to come home early because it's a slow night, slow day, whatever the reason. So he's not always full-time hours, and it's just his income."

That has health consequences. Two-thirds of Valley clients have high blood pressure. More than a one-third have diabetes.

"We're seeing folks that are coming with increased frequency and asking for more help, so we're doing things like utility assistance and helping to back fill that," Pancho Guevara, a spokesperson from Sacred Heart Community Service said.

And some families are moving to get cheaper rent so they can buy food.

"There are a large number of people who might be able to get by but minimally," said Cynthia McCown, a spokesperson for Second Harvest Food Bank. "We're also seeing a shift in which people are moving as far as the economy so it might be North County they might have been living and are now moving to other areas."

The recent findings were part of a larger study by a network of 200 food banks called Feeding America. The study showed that 46 million people -- one in every seven Americans -- rely on food pantries and meal service programs to feed themselves and their families. The problem is worse in the military - where one of every four military families need some sort of food assistance. 43 percent of the recipients are white, 26 percent black, and 20 percent Hispanic.
Related topics:
societymilpitassilicon valleyhungerfood bankpolitics
Copyright © 2021 KGO-TV. All Rights Reserved.
More Videos
From CNN Newsource affiliates
TOP STORIES