KGO
By by abc7news.com staff 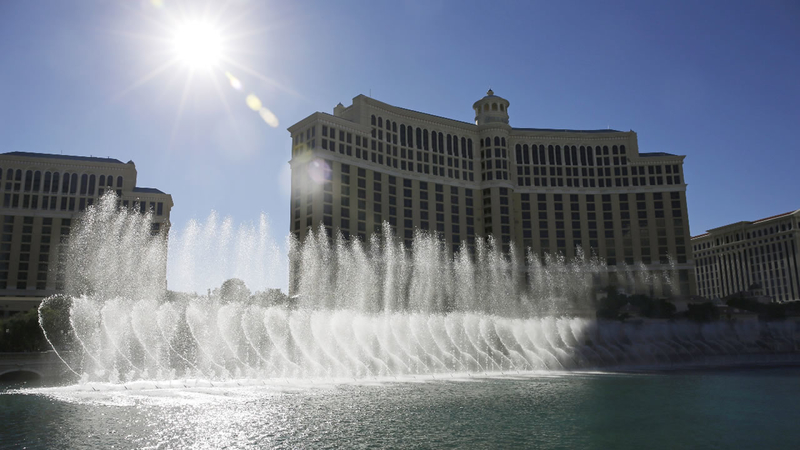 Surveillance video from the Bellagio casino in Las Vegas shows a man in a wig making off with a bag full of cash.

On Thursday, the Las Vegas Metropolitan Police Department released video of Tuesday's robbery. The man is seen going into a poker room with a gun and demanding money from the cashier cage. The employees gave him cash, but police will not say how much money he got.

At the end of the video, he is seen running out of the casino and then driving off in a silver car. We have since learned the robber carjacked the owner of that vehicle at gunpoint.

Investigators tell ABC News the owner of the car was tied up in the trunk during the robbery. While the robber was inside, the car's owner used the trunk release latch to escape. Officers later found the car abandoned.

No one was injured in the robbery. Actor James Woods was playing poker at the Bellagio when it happened and Tweeted about what he saw.

So we are playing poker at the @BellagioPoker and a guy walks up with a gun and robs the cage thirty feet from us ten minutes ago.

.@Bellagio staff were fantastic. They surrendered the money quietly, so no customers would get hurt. Nobody even realized it was happening. Excellent staff, cool under pressure.

The @Bellagio security made a point of not engaging him after the actual robbery to guarantee the safety of their customers.

In true poker player fashion we all were focused on the hands we were playing and nobody actually realized it was happening. The gunman pointed his weapon at the cashier with his back to the room.

Portion of Times Square in NY shut down after 2 people, including 3-year-old child shot