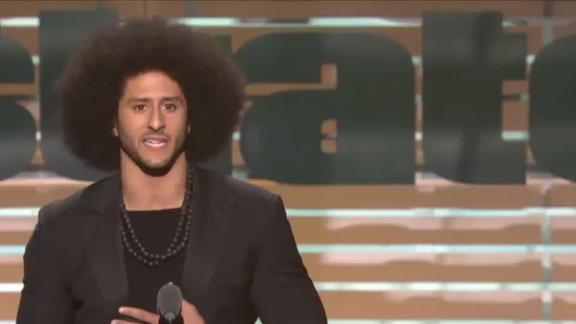 NEW YORK -- Beyonce presented Colin Kaepernick with Sports Illustrated's Muhammad Ali Legacy Award on Tuesday night, and Kaepernick promised that "with or without the NFL's platform, I will continue to work for the people."

Beyonce was brought out as a surprise presenter by comedian Trevor Noah. She said she was "proud and humbled" to present the award, givento "former athletes and sports figures who embody the ideals of sportsmanship, leadership and philanthropy as vehicles for changing the world."

"Colin took action with no fear of consequence or repercussion, only hope to change the world for the better," Beyonce said. "To change perception, to change the way we treat each other, especially people of color."

"He fully embraced the risk to his career in order to remind Americans of the systemic racism that was denying African-Americans their opportunities to equal education, jobs, health and even their lives," Abdul-Jabbar said.

Kaepernick began kneeling during the national anthem last season to protest racial inequality and police brutality. The demonstration sparked a wave of protests by NFL players during the anthem that repeatedly have been denounced by President Donald Trump.

Kaepernick parted ways with the San Francisco 49ers in March and hasn't been signed by another team. He filed a grievance against the NFL in October alleging that he remains unsigned as a result of collusion by owners following his protests.

He spoke Tuesday about continuing Ali's legacy of fighting social injustice, saying the boxing great "mentored me without ever meeting me."

"The footprints he leaves are large," Kaepernick said, "and his life is and has been a multitextured tapestry that is rich in love, wisdom, life lessons and human kindness. I can only hope that I'm taking steps toward walking on the footsteps that he has left behind for the world to follow."

Kaepernick skipped the red carpet prior to the show and was not available for questions. The awards show will be broadcast Friday night on NBC Sports Network.

Kaepernick also recently was honored by the ACLU of Southern California with the Eason Monroe Courageous Advocate Award and was named GQ magazine's "Citizen of the Year" for his activism, which included pledging $1 million to "organizations working in oppressed communities." 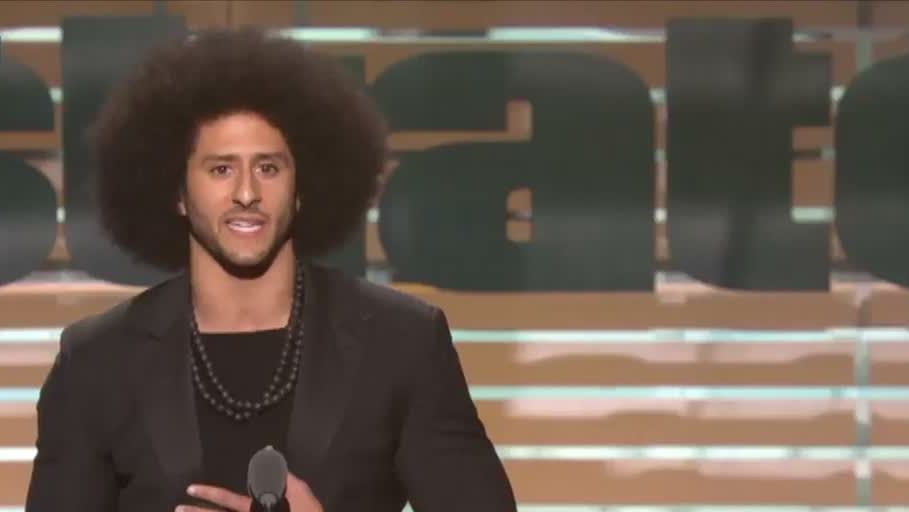