It's why he looks forward to Hanukkah, the Jewish festival celebrating the rededication of the second temple in Jerusalem with a tiny bit of lamp oil that lasted eight days.

"Potato pancakes have really become synonymous with Hanukkah because they are fried and they are oily," he explained.

Potato pancakes, or latkes, start with grated russet potatoes, which Bloom demonstrated on a cutting board in the front window of his bustling 24th St. restaurant.

"My grandma always used to say if you get a little blood from your knuckles in there, it's gonna make it taste all the better," he joked.

To keep the potatoes crispy, he suggests squeezing out the water before adding a quintessential Jewish ingredient: onions.

"I like a lot of onion," he said while continuing to grate.

Bloom likes to cook with his bare hands. He threw the onion and potato shavings into a big bowl with two eggs, a generous helping of salt, and a dusting of potato starch, then dug in with all ten fingers to mix it up.

"Your house is just gonna smell like fried potatoes, that's just the way it is," he said as he threw the first latke onto a well-oiled flat-top grill and patted it down.

Unlike hash browns -- their distant cousins -- latkes are traditionally served with sour cream and applesauce. Wise Sons makes its own using tart apples like Granny Smiths. Two latkes per person can suffice if you're also serving the Jewish holiday staple: brisket.

"That can cook in the oven for hours and hours," Bloom said.

Made from the same cut of meat as corned beef and pastrami, the secret to brisket is in the slicing, Bloom said.

"That's the line of the muscle, and you just wanna cut across them," he said, pointing to the perfectly curled strips of meat.

For dessert, another fried food is a Hanukkah must-have: "sufganiyot," better known as jelly donuts.

"You gotta really have a good amount of filling inside so they ooze -- and they should be messy," Bloom said.

Those jelly donuts have developed a year-round following in San Francisco, quite by accident. It started a year ago when a bakery called Frena opened on 6th Street, just south of Market.

"The week of Hanukkah, we had line going out (into) the street to the next street," said bakery owner Isaac Yosef.

He originally opened the shop with the goal of bringing authentic Israeli pita bread to San Francisco. The donuts were intended as a once-a-year holiday treat.

The bakery is certified as kosher, which requires milk and meat products to remain completely separated. The donuts are kosher to eat right after brisket because they're dairy-free: in other words, they're vegan donuts. In San Francisco, that was an instant hit.

During Hanukkah, he expects to sell thousands of them -- and Bloom says he's expecting to serve 7,000 to 9,000 latkes at his five restaurants.

He'll also make sure to save a few extra for himself.

"I always have to taste a little bit," he confessed.

Do you want to make something delicious for Hannukah? Here's the Wise Sons potato latke recepie that's sure to wow everyone.

Wise Sons uses starchy russet potatoes as they create the creamiest, crispiest latke. Make sure to squeeze out all of the water so that the potatoes brown well and don't steam too much in the pan; this will also reduce splattering. Work quickly once the potatoes have been grated to avoid discoloration. This recipe is great because it makes ultra crispy latkes with a creamy interior.

The scent of the frying potatoes brings us back to the smells of our grandmother's kitchen at Hanukkah time. These are great as a side to a savory brisket or roast meat, perfect with smoked salmon for a luxurious holiday brunch, or crisped up in a pan as leftovers in a breakfast hash.

Batter:
Grate the potatoes (no need to peel!) and then the onions using the large holes on a box grater.

Wrap the potato-onion mixture in a dish towel and squeeze over a bowl or the sink to remove the water.

Transfer the mixture to a medium mixing bowl. Add the potato starch, eggs, salt and pepper. Stir
to combine.

Cook:
Preheat the oven to 250 degrees. Set a wire cooling rack over a rimmed baking sheet and line the rack with paper towels

Heat a medium cast iron or heavy bottomed skillet over medium-high heat and add oil to a " deep. When the oil is hot, about 360 with a candy thermometer, spoon about a quarter cup of the batter into skillet per latke, lightly spreading into an evenly thick round.

Don't overcrowd the pan and don't fidget with them too much. Cook undisturbed until golden brown and crisp, about 4-5 minutes, then carefully flip with a wide spatula and cook 4 minutes more.

You'll need to watch the temperature of the oil, being careful not to burn your potatoes, alternatively, if the oil is too cold, you'll have soggy and greasy clumps of potato.

Transfer to the paper towel or paper bag-lined rack to drain and season with another pinch of kosher salt.

Eat them hot from the pan, or keep warm in a low temperature oven while you complete the rest of the Latkes. Latkes freeze particularly well and can be reheated at about 350 degrees for 15 minutes.

Click here for more stories to get you into the holiday spirit.
Report a correction or typo
Related topics:
food & drinksan franciscoholiday recipeshanukkahholidaybuzzworthyfoodreciperestaurantrestaurants
Copyright © 2021 KGO-TV. All Rights Reserved.
HANUKKAH 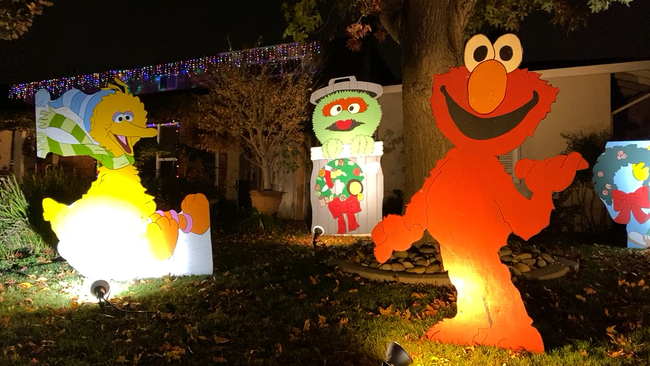 Fremont neighbors continue holiday lights tradition for a good cause 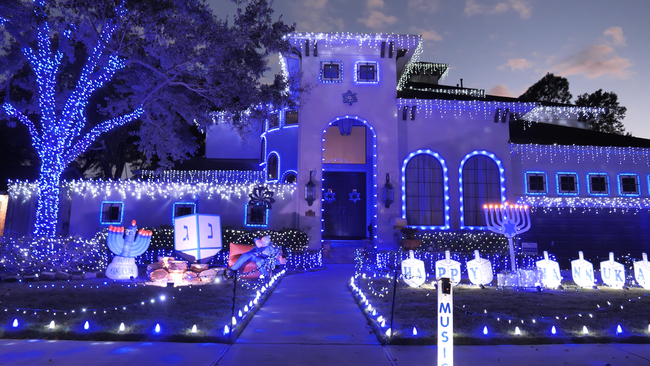 Hanukkah House known around the world!